Yadav may offer Siwan and Ara parliamentary seats to the ultra-Left party to win it over for expanding the secular base. 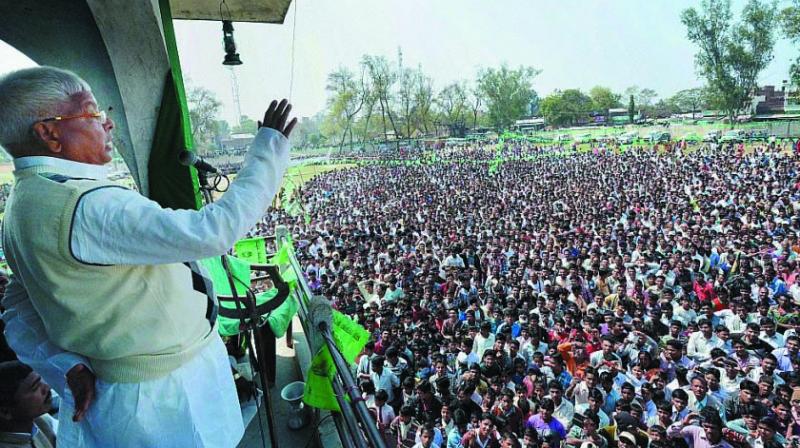 Patna: With its eyes set on 2019 general election, Bihar’s Opposition party RJD is now planning to counter the ruling JD(U)-BJP alliance with a pact with the Communists, including the ultra-Left CPI(ML), to expand the secular base. The move follows the dramatic collapse of the Grand Secular Alliance in July, changing the political contours of the caste-conscious state.

Reports coming from within the RJD suggest that party chief Lalu Prasad Yadav has narrowed down on the Left in his desperate search for allies to take on the NDA.

Sources said that the former chief minister might even go to the extent of including the CPI (Marxist-Leninist) in the Left unity and concede many demands of the ultra-Left party.

According to RJD MLA Mohammad Neamatullah, “The party’s agenda is to stop BJP from coming to power in 2019 and for this we have to draw a bigger line. The RJD is ready to shake hands with all non-BJP parties to expand its secular base.”

RJD insiders claim that Mr Yadav may also agree to offer Siwan and Ara parliamentary seats to the CPI(ML) by sacrificing his strongman Mohammed Shahabuddin, a former MP of Siwan.

The speculation has taken the political circle by surprise because the RJD has been fighting a tough political battle with the ultra-Left party in Bihar for the past several decades.

It was because of the rivalry with Mr Yadav that the Indian People’s Front (IPF), the political outfit of the then underground Left organisation, had offered support to Nitish Kumar’s Samata Party which parted ways with Mr Yadav in the early nineties.

Observers believe that if the move of Mr Yadav to join hands with the ultra-Left party materialises, it may change the political arithmetic in Bihar and lend a formidable advantage to the RJD chief in offering a viable alternative to the NDA.

The CPI(ML), however, denied holding official discussion on an understanding with the RJD. CPI (ML) legislator Mahboob Alam told this newspaper that, “The RJD has only been giving statements but we don’t see any concrete strategy to fight against communal forces. RJD needs to come out on the streets to fight for the cause of people”.

The Left leader also raised questions on the Congress which is a part of Grand Secular Alliance in Bihar. “We are also against Congress’ soft Hindutva policy which they have been following to gain power. As far as Siwan and Ara seats are concerned our central committee will take a final call on the issue,” he said.

Mohammad Shahabuddin, despite being convicted and facing several heinous criminal charges including kidnapping and murder, is still a senior member of the RJD. He was barred from contesting elections after he was convicted in a criminal case in 2007.

Shahabuddin, projected by Mr Yadav as the party’s Muslim face, was elected as Lok Sabha MP in 1996 and remained in Parliament for four consecutive terms till he was declared guilty of abducting with intent to murder by a Siwan court in 2007.

In 2009 and 2014, Heena Shahab, the wife of incarcerated former RJD MP had contested from Siwan but lost to BJP as CPI(ML) ate into the secular votes.

The CPI(ML) currently has three members in the state Assembly and the RJD chief realises that that the Left party will never accept his friendship offer until he takes a harsh decision on Shahabuddin, a mafia don and four-term former MP who was initiated into politics by Mr Ýadav. The conflict between both the parties had deepened after JNU student leader Chandrasekhar was murdered in 1997 allegedly on the instructions of Shahabuddin.

Observers say that in the early 1990s when Mr Yadav was expanding his party’s base in Bihar he had engineered a split in CPI(M-L) which was a popular force among the poor sections in several districts including Siwan, Bhojpur, Jehanabad and Arwal. During this period the CPI(ML) was involved in a caste-based massacres and conflict with upper caste outfit Ranvir Sena.

Mr Yadav had then backed a Naxal outfit Maoist Communist Centre (MCC) against the CPI(ML) which led to the killing of several CPI(ML) workers.

Strength of CPI(ML) is its equidistance from all
Despite the Rashtriya Janata Dal sending strong signals to the CPI (ML) to overcome political differences and form an alliance to strengthen the secular base ahead of the 2019 general elections, the leaders of the ultra-Left party seem to be in two minds.

The stand of the ultra--Left party has always been to maintain equidistance from both the Congress and the RJD.

CPI(ML) legislator Mahboob Alam said, “The party is focusing on strengthening the unity of all Left parties and alliance with any other group will be discussed after reviewing their strategy”.

The CPI(ML) enjoys a considerable amount of support in central Bihar districts. In 2015, the ultra-Left party won three seats despite a strong wave in favour of the Grand Secular Alliance.

The CPI(ML) often referred to as “Maale” in Bihar has strong pockets of support among poor and landless farmers in central and southern Bihar.

In the early 1990s, when Mr Yadav emerged as political force after forming an alliance with CPI and CPI-Marxist. The CPI(ML) was the only Left party which had stayed away from the alliance.

This was also the period when the ultra-Left party was involved in a violent conflict with upper caste outfits, including Ranvir Sena, which led to several massacres.

In the late 1970s and 1980s, the CPI(ML)  expanded in Bhojpur, Gaya, Aurangabad, Jehanabad and other places in central Bihar and later Siwan in the north. It worked as an underground outfit in the 1980s and 1990s. Later, it emerged as an active political outfit.