Illnesses are a severe risk and can shave off most of the hard-earned savings in low-income communities. 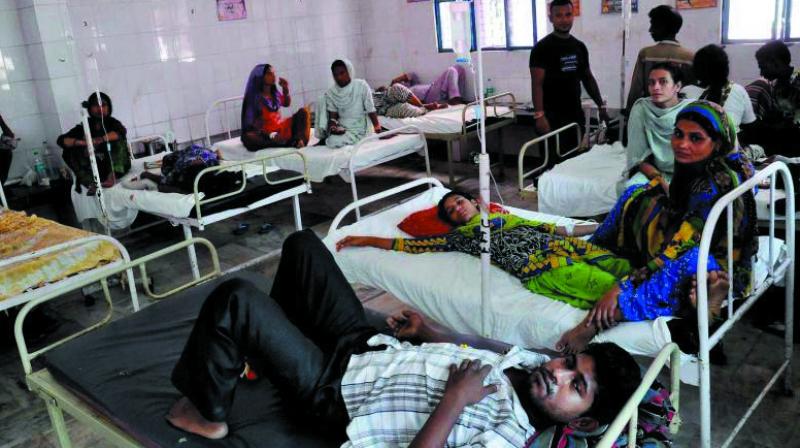 The National Health Policy 2017 has proposed to increase the public spending on healthcare from a dismal 1 per cent to a meagre 2.5 per cent of GDP by 2020, which is itself well below the world average of 5.99 per cent.

India’s economy is soaring but healthcare remains an Achilles heel. For millions of people the high costs of treatment of illnesses continue to undermine economic progress. This is largely on account of India’s abysmal and chaotic healthcare system that is plagued by falling budgetary healthcare support by the government. India ranks close to the bottom of the pile in international rankings in most health indices.

At an investment 1.3 per cent of GDP in health services, which has remained at the same level in a decade, India ranked 187th out of 194 countries by World Health Organisation (WHO), while carrying 20 per cent of the global burden of diseases. The comparable rates are 1.5 per cent in Sri Lanka, 2.7 per cent in China, and 3 per cent in Thailand. The National Health Policy 2017 has proposed to increase the public spending on healthcare from a dismal 1 per cent to a meagre 2.5 per cent of GDP by 2020, which is itself well below the world average of 5.99 per cent. This is an appalling situation and calls for an urgent action.

Illnesses are a severe risk and can shave off most of the hard-earned savings in low-income communities. They are the number one route to bankruptcy. The Indian ministry of health found that a quarter of all people hospitalised were pushed into poverty by their hospital costs — not including the cost of missed work.

Universal healthcare in India remains a distant reality because healthcare still continues to remain very low on the government’s priority card. Nobody wants to talk about the elephant in the room. While facilities in Indian metros are competing with the world’s best medical centres, the scenario beyond the urban conglomerates is quite discouraging. The demand and supply in healthcare services still show a significant disparity in urban and rural areas as also regional imbalances. Here’s a snapshot:
Thirty per cent of Indians don’t have access to primary healthcare facilities.
About 39 million Indians fall below the poverty line each year because of healthcare expenses.
Around 30 per cent in rural India don’t visit hospitals afraid of the expenses.
The healthcare needs of 47 per cent of rural India and 31 per cent of urban India are financed by loans or sale of assets.
About 70 per cent of Indians spend all their income on healthcare and buying drugs.
Out-of-pocket spending in India — 69 per cent of total health expenditure — is among the highest in the world and much more than in Thailand (25 per cent), China (44 per cent) and Sri Lanka (55 per cent).

Nearly 30,000 doctors, 20,000 dentists and 45,000 nurses graduate from medical colleges across India every year. The doctor-to-patient ratio in India is six for 10,000 people, way below Australia (1:249), the UK (5:1,665) and the US (9:548). The global ratio stands at 15 doctors for 10,000 people. The distribution of these doctors is uneven with low ratio in states like Chhattisgarh and Jharkhand — just two doctors for 1,00,000 people. There are only six hospital beds and two surgeons per lakh of population. There is one government doctor for every 10,189 people, one government hospital bed for every 2,046 people and one state-run hospital for every 90,343 people. In comparison to these dismal numbers, the US has 24.5 doctors for every 10,000 people and one hospital bed for every 345 citizens.

India has a laggardly record in healthcare. In per capita terms adjusted for purchasing power, India’s public expenditure on health is $43 a year, compared with $85 in Sri Lanka, $240 in China and $265 in Thailand. European nations spent 10 times and the US 20 times. According to Insurance Regulatory and Development Authority of India (IRDA), the government contribution to insurance stands at roughly 32 per cent, as opposed to 83.5 per cent in the UK. The high out-of-pocket expenses in India stem from the fact that 76 per cent of Indians do not have health insurance.

The recently released National Health Accounts (NHA) 2014-15 shows that the average government spending per citizen per year was just `1,108 against almost `6,300 per Central government employee. According to the NHA, India’s total health expenditure in 2014-15 worked out to `3,826 per person. Of this, what people had to spend from their own pockets was `2,394 (63 per cent). In 2014-15, the government’s expenditure on the National Health Mission meant to boost the public healthcare system was `20,199 crores. Spread it over a population of roughly 1.25 billion and you get a paltry `162 per head.

The apathy of the government is reflected in a rather poor prognosis for the health system. Primary health centres (PHC) in villages are supposed to screen and feed medical cases to specialist hospitals in districts and further on to state-level specialist hospitals. PHCs are not present in many villages (about one for every 20 villages), and where present are so acutely undermanned that the “access” system is broken at the first mile. As many as 18 per cent of PHCs were entirely without doctors. This impacts not only the filtering of patients but also deeply impairs prevention and early detection which is a must if costs in the whole system are to be contained. The only redeeming feature is the committed cadre of Auxiliary Nurse Midwife (ANM) at PHCs and their sub-centres and accredited social health activists (ASHAs).

Our healthcare facilities have grown significantly in terms of numbers and expertise of our professionals, but this has largely been in the private sector. The government’s failure to deliver quality care has led to a rapid expansion of private hospitals, which today account for 93 per cent of all hospitals (up from 8 per cent in 1947), 64 per cent of all beds, and 80 per cent to 85 per cent of all doctors. But mass access continues to remain a challenge. For the private sector, affordability in Tier 3 cities and rural areas is a critical limiting factor for further expansion.

The health infrastructure is heavily skewed in favour of urban areas. Nearly 75 per cent of dispensaries, 60 per cent of hospitals and 80 per cent of doctors are located in urban centres. Doctors cater to a third of the urban population, or no more than 442 million people.

There are around 734 district hospitals across the country, which provide secondary healthcare facilities to people. In addition, there are around 300 other hospitals, such as women’s hospitals at the district level. They are powerful nodes in India’s healthcare network and can be revitalised to boost the health infrastructure.

India needs to reform the public healthcare sector’s governance and management systems. The approach to service delivery has to be a functional referral linkage and establishing a “continuum of care” across the spectrum from village to sub-health centre to primary healthcare, sub-district hospital and the district hospitals. The challenge remains to reform the health system and its workforce in particular, so that practitioners, administrators and others have the skills, knowledge and professional attributes to meet the emerging healthcare needs of our community.

Several laudatory policies are already in place. The direction of travel is right but we have to accelerate the pace of the journey. For reforms to be successful we need hard-coded timelines and accountability of those tasked with the administration. It is now for the policy doctors to collaborate with the real doctors to use their ingenuity to come up with radical solutions that can cope with the mounting challenges of healthcare.