Train runs over 3 jumbos in Assam

The incident occurred in between Kampur and Jamunamukh railway station in the wee hours. 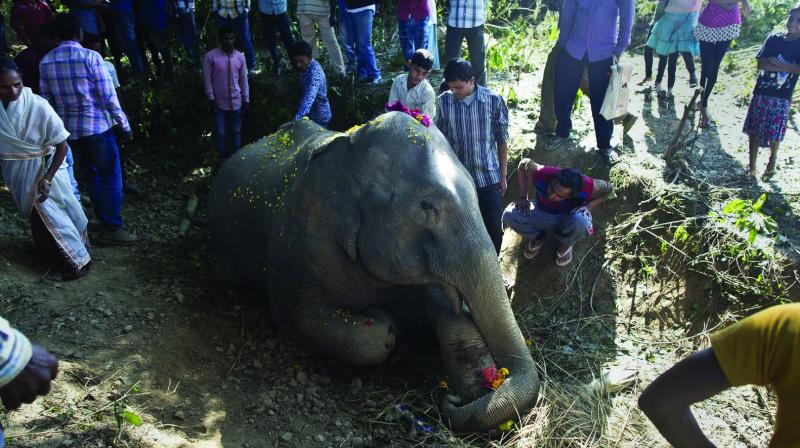 Villagers gather around the body of an elephant that was among the three elephants killed near Guwahati. (Photo: PTI)

Guwahati: In yet another tragic incident, at least three elephants, including a calf, were mowed down by a speeding railway engine in central Assam’s Nagaon district on Saturday.

The incident occurred in between Kampur and Jamunamukh railway station in the wee hours of Saturday.

With this, the total number of elephants killed on railway tracks in Assam in 2016 has reached nine.

On December 5, three elephants — two pregnant females — were killed when the 15905 UP Kanyakumari-Dibrugarh Vivek Express knocked them down near Jugijan in Hojai district. On December 6, another elephant was killed after being hit by a goods train between Rangjuli and Amjonga stations, about 90km west of Guwahati. Two wild tuskers were also killed near the Khatkhati railway station in Karbi Anglong district on September 27.

The forest officials, who are accused of being ignorant about the movement of wild tuskers, said the three elephants were members of a herd of 40 to 50 elephants, which came down from the Kandali hills under Daboka reserve forest in search of food. They were hit when the herd was crossing the railway track on their way back to the forest before sunrise, he said.

The incident took place even after the forest department holding an emergency meeting with the Northeast Frontier Railway (NFR) officials. In the meting, the officials decided to limit speed of trains to 15km/hr at elephant corridors.

Assam forest minister Pramilla Rani Brahama said, “The frequent death of wild elephants in train accident is very unfortunate. We have taken the issue seriously and efforts are on to increase coordination between forest and railway officials to minimise such incidents.”

Meanwhile, Northeast Frontier Railway chief public relation officer Pranav Jyoti Sharma said the incident occurred where speed limit is imposed on trains. “The place is not within the vulnerable area marked by forest department,” he said.