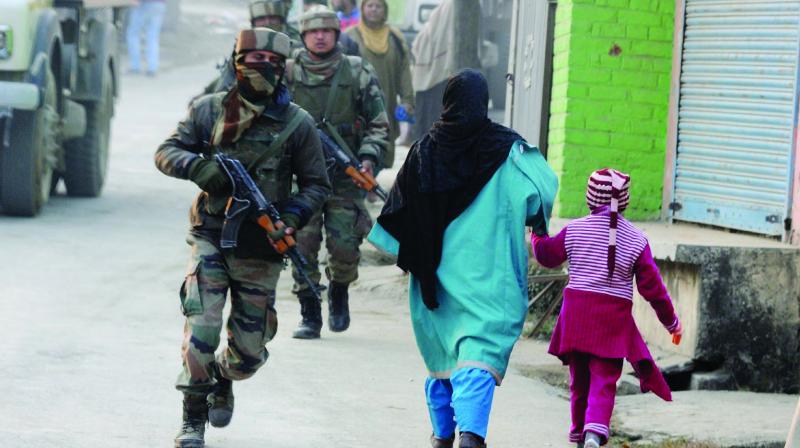 Srinagar: Three jawans were killed and two others wounded in an ambush on an Army convoy near Srinagar on Saturday afternoon, the latest in a string of attacks against security forces by suspected Pakistan-backed terror groups.

This comes about three weeks after terrorists killed seven soldiers at an Army base near Jammu, the most audacious attack in J&K since the killing of 19 jawans in Uri in September.

About 28 soldiers have been killed in terror attacks and border skirmishes after India carried out surgical strikes across the LoC to avenge Uri.

In Saturday’s ambush, 20 km south of Srinagar, five soldiers in one of the vehicles moving towards Srinagar were hit. Three of them died on way to or soon after being admitted to an Army hospital.

Meanwhile, soldiers in other vehicles got down, took positions and returned fire but the assailants had already fled the area leaving behind an AK-47 magazine with 20 live rounds.

A cab driver also injured in the shooting was admitted to Pampore’s sub-district hospital, sources said.

Soon after the attack, Army reinforcements — joined by the members of J&K police’s counterinsurgency Special Operations Group (SOG) and the CRPF — laid siege to the area to launch massive house-to-house searches. A report said that the militants were seen driving through a side street after carrying out the attack.

Pampore has been under attacks for a while. In October, two militants were killed in a 57-hour standoff in a govt building outside the town.

In February, three soldiers and as many militants and a civilian were killed during a three -day gunbattle in the same compound. Two jawans had been killed and eight injured hours earlier.

In June, 8 CRPF jawans were killed and 20 injured in an ambush on their convoy. Three militants were killed in retaliatory action.