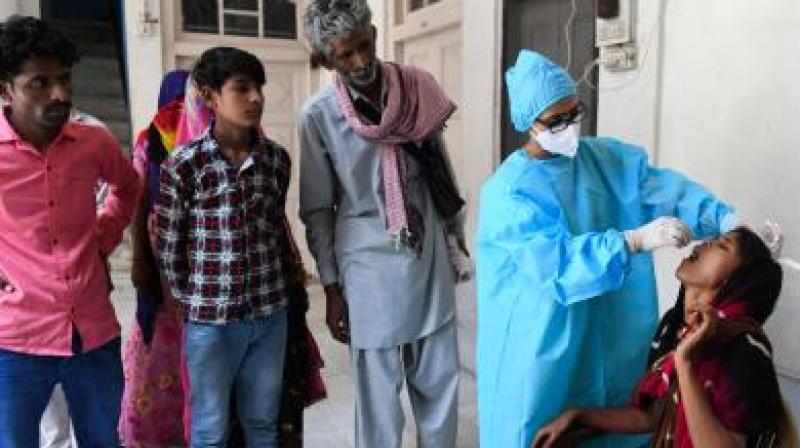 The daily rise in the number of coronavirus cases has been below 20,000 for 41 straight days. (AFP file photo)

The death toll due to the viral disease has shot up to 4,64,623 with 470 more fatalities, according to the ministry's data updated at 8 am.

The daily rise in the number of coronavirus cases has been below 20,000 for 41 straight days now and less than 50,000 fresh cases have been reported for 144 consecutive days.

The number of active cases of the infection has gone up to 1,28,762, accounting for 0.37 per cent of the total caseload, the lowest since March 2020, while the national COVID-19 recovery rate was recorded at 98.28 per cent, the highest since March 2020, the ministry said.

An increase of 207 cases in the active COVID-19 caseload was recorded in a span of 24 hours, it added.

The daily positivity rate was recorded at 0.97 per cent. It has been less than two per cent for 45 consecutive days.

The weekly positivity rate was recorded at 0.94 per cent. It has been below two per cent for the last 55 days, according to the health ministry.

The number of people who have recuperated from the disease has climbed to 3,38,85,132, while the case fatality rate was recorded at 1.35 per cent.

The total number of vaccine doses administered in the country under the nationwide Covid inoculation drive has exceeded 114.46 crore.

The country crossed the grim milestone of two crore Covid cases on May 4 this year and the three-crore mark on June 23.

The 470 fresh fatalities caused by Covid include 388 from Kerala and 32 from Maharashtra.

Of the 388 fatalities in Kerala, 61 were reported over the last few days and the remaining 327 were designated as COVID-19 deaths after receiving appeals based on the new guidelines of the Centre and Supreme Court directions, according to a release issued by the state government.

"Our figures are being reconciled with the Indian Council of Medical Research," the ministry said on its website, adding that a state-wise distribution of the figures is subject to further verification and reconciliation.