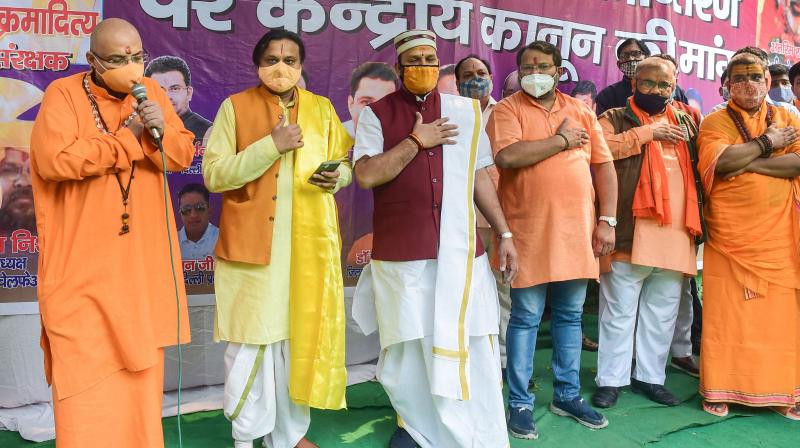 Bhopal: No case of alleged “love jihad” has so far been reported in Madhya Pradesh and yet the BJP-led government in the state is all set to bring a legislation in the ensuing winter session of the Assembly making “love jihad”, a term coined by rightwing politicians to attack interfaith marriages, a cognizable and non-bailable offence.

The Bharatiya Janata Party and several rightwing, Hindutva outfits have been targeting young couples and interfaith marriages, alleging that they are done with the intention to convert Hindu girls. No leader or organisation has till now offered any statistics to prove their charge.

The proposed legislation in Madhya Pradesh provides rigorous imprisonment of up to five years for “forcible marriage, seduction and forced conversions”.

“The draft bill for the proposed legislation, christened Madhya Pradesh Dharma Swatantra Vidheyak, 2020, is ready. The bill will be tabled in the coming winter session of the Assembly,” Madhya Pradesh home minister Narottam Mishra told reporters here on Tuesday.

Mr Mishra’s announcement comes in the wake of a stern warning issued by chief minister Shivraj Singh Chouhan a couple of weeks ago that “jihad” (religious war) in the name of love would not be tolerated in Madhya Pradesh.

The draft bill proposes to declare forced marriages and conversions null and void. It has provision to treat the collaborator in the forced marriage at par with the main accused.

The district magistrate concerned has to be informed one month in advance for voluntary conversion for marriage by both the persons concerned and the conversant, the draft bill says.

Madhya Pradesh is the third BJP-ruled state after Uttar Pradesh and Haryana that proposes to introduce a law to check what the BJP has been calling “love jihad” to curb alleged forced conversions of Hindu girls in some interfaith marriages, particularly with Muslim boys.

Congress has slammed the move by the Shivraj government to bring legislation against ‘love jihad’, saying that the law would pave way for targeting and attacking a particular community. “Love is sacred and it is not proper to bring anti-‘love jihad’ law,” former minister and senior Congress leader P.C. Sharma said.