The BJP’s oldest ally, the Shiv Sena, was incidentally missing from the NDA meet as the two parted ways over the chief minister’s post in Maharashtra. 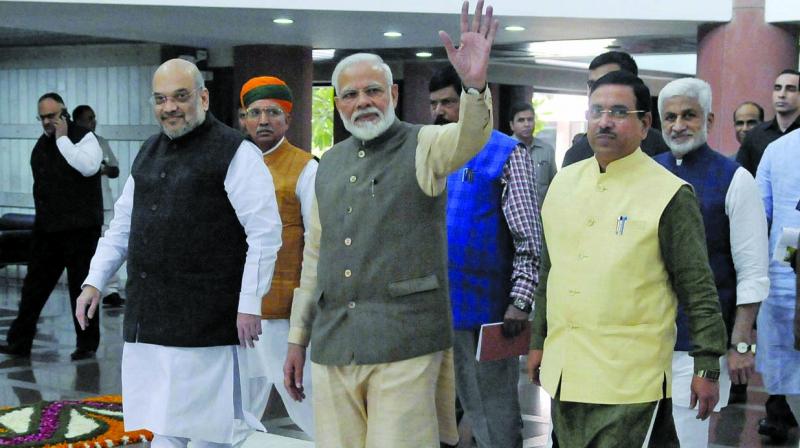 Prime Minister Narendra Modi with Union home minister Amit Shah and others at Parliament Library Building in New Delhi on Sunday after attending an all-party meeting ahead of the Winter Session. (Photo: Pritam Bandyopadhyay)

New Delhi: With the Opposition preparing to corner the government over the economic slowdown, joblessness and farmers’ distress, among other issues, Prime Minister Narendra Modi pledged on the eve of the Winter Session starting Monday that the government was ready to discuss all issues on the floor of the House. Also, the Rajya Sabha will be celebrating its 250th session.

A series of meetings took place on Sunday, which also included an all-party meeting called by the government and a meeting of the ruling NDA, that the PM hailed as an alliance representing “India’s diversity and the aspirations of 130 crore Indians”. The BJP’s oldest ally, the Shiv Sena, was incidentally missing from the NDA meet as the two parted ways over the chief minister’s post in Maharashtra.

The Winter Session, starting two weeks after the Supreme Court’s landmark judgment on the centuries-old Ram Janmabhoomi-Babri Masjid dispute, is likely to see the government’s managers trying to push through some key bills, including the controversial Citizenship (Amendment) Bill.

“Attended the all-party meeting earlier today. This time, we mark the 250th session of the Rajya Sabha. In both Houses, we shall have constructive debates on ways to empower citizens and further India’s development,” the PM tweeted on Sunday.

At the all-party meeting convened by the government on Sunday morning, Mr Modi said the most important job of the House was to discuss and debate and this session should also be as productive as the last one. He also emphasised that the 250th session of the Upper House “provided a unique opportunity for highlighting the unique strengths of the Indian Parliament as well as the Indian Constitution, in providing an overarching framework of governance institutions for a diverse country like India”. He also said the session was being held as India was celebrating the 150th birth anniversary of Mahatma Gandhi.

However, some Opposition MPs demanded that fellow MP and National Conference president Farooq Abdullah, who is under detention in Jammu and Kashmir, should be allowed to attend the House. The government, sources said, gave no definite response on this matter. Former Jammu and Kashmir chief minister Farooq Abdullah was detained under the Public Safety Act in September.

“The Prime Minister, while responding to specific issues raised by the representatives of various political parties, said that the government would work together with all parties in a constructive manner to address pending legislation and frame policy solutions for specific issues on the environment and pollution, the economy, the agriculture sector and farmers,” the parliamentary affairs ministry said in a statement. Mr Modi also told MPs at the all party-meeting that constructive discussions in Parliament also keeps the bureaucracy alert.

After the meeting, senior Congress leader and Leader of the Opposition in the Rajya Sabha Ghulam Nabi Azad said the government takes a different stand when it comes to taking up issues such as unemployment, the economic slowdown, the condition of farmers in the House. National Conference’s Hasnain Masoodi said they raised the issue of Farooq Abdullah’s detention at the meeting and stressed that the government was under a constitutional obligation to ensure his participation in the Parliament session. Mr Azad also sought to know how an MP can be detained illegally and also demanded that former finance minister and senior Congress leader P. Chidambaram be allowed to attend Parliament. The LoP said there had been instances in the past when in similar cases MPs have been allowed in the House.

After the NDA meeting, LJP chief Chirag Paswan said an NDA convener should be appointed to ensure better coordination among the alliance partners.