PM Modi and Solih agreed the two countries would be mindful of each other's concerns and the need for stability in the Indian Ocean. 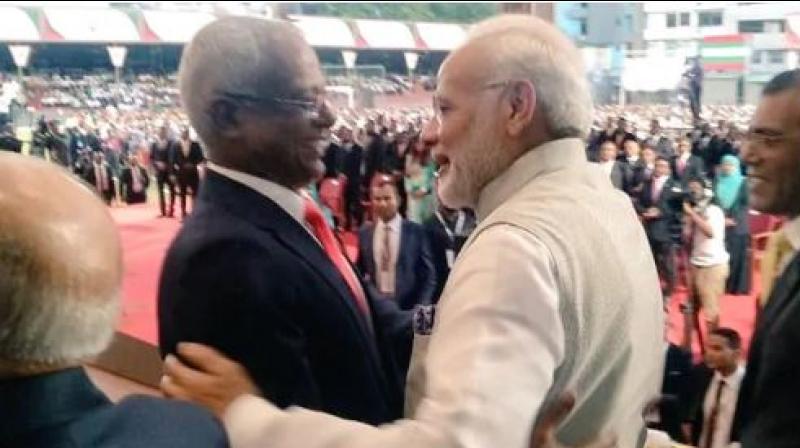 India, which has long been the Maldives' main political and economic partner, had grown concerned that China's expansive diplomacy was aimed at establishing an outpost on the islands. (Photo: Twitter | @MEAIndia)

New Delhi/Male: As the new president of the Maldives took office on Saturday, declaring the state coffers to have been looted, he warned that the country was in financial difficulty after racking up debt with Chinese lenders in an infrastructure boom.

Prime Minister Narendra Modi, the highest ranking foreign visitor at the ceremony held in a soccer stadium in the capital Male, told President Ibrahim Mohamed Solih that India stood ready to help the country through its economic difficulties, the Indian foreign ministry said in a statement following their meeting.

The Maldives, famous for its luxury resorts on palm-fringed islands, is the latest in a number of small countries where China has invested millions of dollars building highways and housing as part of its Belt and Road Initiative.

But these projects have left the country of just over 400,000 people in debt and prompted calls for investigations into how contracts were awarded to Chinese companies during the previous administration.

"As I take over the presidency, the state's financial situation is precarious. The damage done due to projects conducted only for political reasons, and at a loss, are huge," said Solih in a speech soon after he was sworn in as president.

Solih, a veteran lawmaker, won the presidential election in September as a joint opposition candidate against president Abdullah Yameen, a strongman who steered the country closer to China and faced international pressure over imprisoning political rivals.

"The state coffers have lost several billions of rufiyaa (local currency) due to embezzlement and corruption conducted at different levels of the government," Solih said.

He said it wasn't clear how much the state had lost. His transition team said this week it would conduct a forensic audit of deals sealed by the Yameen administration, many of them with Chinese state firms.

The big worry for Solih's team is the debt the country has run up with Chinese lenders for projects such as a mile-long sea bridge connecting the airport to the capital, the airport expansion itself and massive housing projects on reclaimed islands.

Solih's transition team said it had been told the country owed USD 1.5 billion to Chinese lenders, but fear it could be much higher. Even a debt of USD 1.5 billion would be more than a quarter of the country's annual gross domestic product.

India, which has long been the Maldives' main political and economic partner, had grown concerned that China's expansive diplomacy was aimed at establishing an outpost on the islands.

China has already gained a strong foothold in Sri Lanka, just off the southern coast of India, where it has a built a port and now controls it in a debt-for-equity swap. With Solih's win, India hopes it will be able to win back a country it considered as part of its area of influence.

PM Modi and Solih agreed the two countries would be mindful of each other's concerns and the need for stability in the Indian Ocean, the Indian foreign ministry said in the statement.

China has said it hoped there would be continuity in policies during Solih's presidency and it would create good conditions for Chinese firms.