The SP had given a ticket to farmer leader from Budhni, Arjun Arya, who was jailed during the recent peasant’s stir in the state. 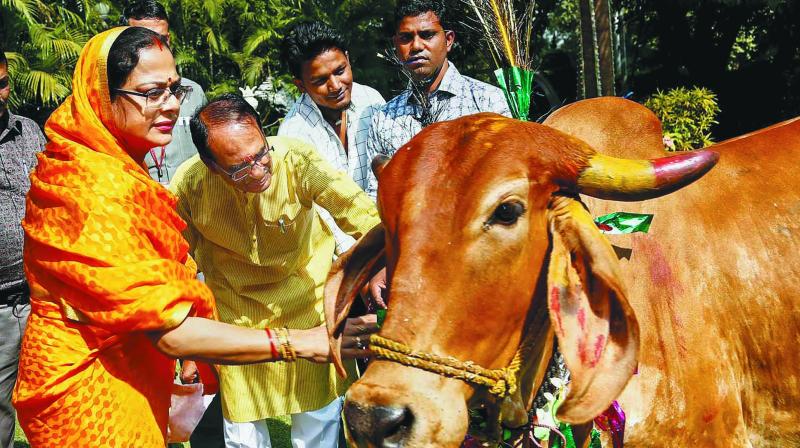 The Congress logic behind pitting ex-state Congress chief Arun Yadav against BJP big gun and MP chief minister Shivraj Singh Chouhan in Budhni is that the Yadav community of their nominee outnumbers the CM’s Kirar community in the seat.

Bhopal: The Congress’ decision to field former Union minister and ex-Madhya Pradesh unit president Arun Yadav against chief minister Shivraj Singh Chouhan from the latter’s home turf Budhni has evoked reactions. While some of Mr Yadav’s followers see it as a step to make him a sacrificial lamb, some Congressmen believe that he will prove to be a giant killer.

Mr Yadav, who had earlier won from Khargone and Khandwa parliamentary constituencies in the state, said that he has been asked by Mr Gandhi to fight against the chief minister.

“I am confident of defeating the chief minister in the polls,” he said.

Supporters of Mr Chouhan’s challengers are so upset over the “last minute” decision by the Congress to field him in Budhni constituency, to which he is not even remotely connected, that they described it a “machination” by his detractors in the party to sideline him.

“There have been attempts by his adversaries in the party to further marginalise him in the Congress ever since he was removed from the post of Pradesh Congress Committee chief in May this year to make way for former Union minister Kamal Nath in the office,” said a supporter of Mr Yadav.

“He was ignored in constitution of various poll committees of the party in the state although he was considered the OBC face of Congress in the state,” a close aide of Mr Yadav told this newspaper on condition of anonymity.

Mr Yadav had in fact almost stopped visiting the state Congress headquarters after being “unceremoniously” removed from the  party post six months ago. He had even declared not to contest either Lok Sabha or Assembly polls as an apparent protest for his “ignominious” exit from the office.

Later, he landed in a controversy when a letter written by him to Congress president Rahul Gandhi, soliciting latter’s presence on the occasion of his father’s death anniversary with the intention of encashing an opportunity for the party to woo OBC voters, was leaked to media.

His loyalists blamed his detractors for leaking the letter to media to show him in poor light before the Congress high command.

Mr Yadav, who has often flaunted his “proximity” to Mr Gandhi, had later reportedly angered the state party leadership by hosting Samajwadi Party (SP) president and former Uttar Pradesh chief minister Akhilesh Yadav for breakfast at his residence  during the latter’s visit to Bhopal a couple of months ago to explore SP-Congress alliance in MP in the November 28 Assembly elections.

The state Congress leadership had later rubbed the former UP chief minister the wrong way by “poaching” the candidate his party had fielded in Budhni against the chief minister.

The SP had given a ticket to farmer leader from Budhni, Arjun Arya, who was jailed during the recent peasant’s stir in the state. But the Congress inducted him amid speculation that he could be pitted against the chief minister. However, at the last minute Arun Yadav was declared the Congress candidate.

“The sequence of events that followed Mr Yadav’s removal from post of PCC chief raise a suspicion that he was pushed into a hopeless situation by his adversaries by getting him fielded against Mr Chouha,” said Mr Yadav’s aide.

A section of Congress workers justified the party’s decision to field Mr Yadav from Budhni.

“Mr Yadav, being a prominent OBC leader, can emerge as a giant-killer by defeating the chief minister in Budhni,” he observed.

Leaders of the BJP believe that Mr Yadav is being sacrificed by his own party, claiming that the Congress challenger is in no position to beat the “invincible” chief minister in Budhni.

“The chief minister is so popular in Budhni that he is invincible in the constituency. Mr Yadav is an outsider in Budhni. He has been made a scapegoat by the Congress,” BJP spokesman Rajneesh Agrawal said.

The chief minister also offered his sympathy to Mr Yadav for being given an almost “unachievable” task of beating him.

“Injustice has been done to my friend Arun Yadav for the second time in six months. First, he was removed from PCC chief post and then he was fielded against me,” said a confident Mr Chouhan.

It will be known only on December 11, when the results for the 230-member Assembly will be declared, if Mr Yadav turns out to be a giant-killer or ends up as a sacrificial lamb.