Rajesh was on his way home after attending a RSS unit meeting when he was attacked by a group of men. 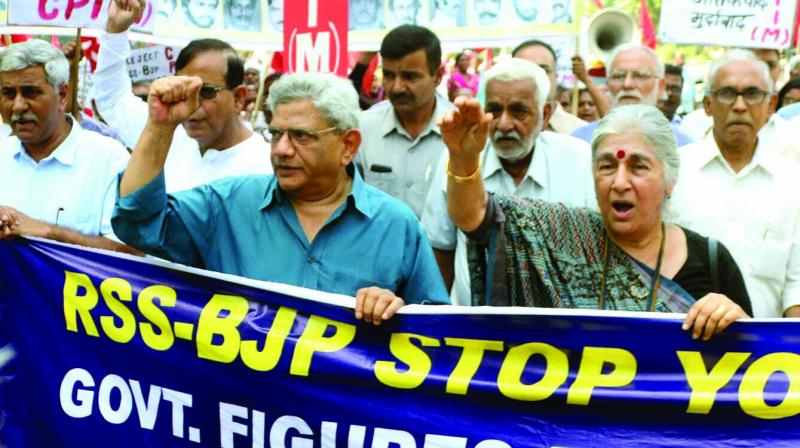 New Delhi: The BJP and the CPI(M) continued their march politics on Tuesday, with the Marxist party’s leaders marching to the BJP headquarters in New Delhi and BJP president Amit Shah taking to the streets in Kerala. Both parties have been indulging in allegations and counter-claims over the killing of their cadres in the state, specially in its northern areas.

While Mr Shah marched in Kerala in protest against the killing of RSS workers allegedly by Leftists, the CPI(M) responded with its own march to the BJP’s headquarters, accusing the RSS of killing CPI(M) workers. “We warn the BJP that if they continue to create violence in Kerala, they will not see even one MLA elected from the state,” CPI(M) general secretary Sitaram Yechury said.

Mr Yechury, who was joined by other party leaders and workers at the rally, accused the BJP and RSS of trying to build up their political and social base in Kerala through violence and terror. Taking a dig at the Mr Shah, he said the BJP president had run away from Kerala and returned to Delhi as he had to save his son, who is accused of corruption. The “red flag” — a reference to the Left’s symbol — cannot be removed, he added.

In Kerala, the BJP chief carried on with his “Janraksha Yatra”, hitting out at Kerala’s CPI(M)-led LDF over the political violence in the state and asked chief minister Pinarayi Vijayan if he was prepared to take moral responsibility for the “killing of 13 innocent BJP-RSS workers”.

“I am asking the Kerala chief minister if e is prepared to take moral responsibility for the killing of 13 BJP-RSS workers in the state after the LDF government came to power,” Mr Shah said, adding: “Chief minister saheb, if you want to fight us, let us fight in terms of development and ideology.” “CPM, you can do as much violence you want, but you can’t stop the BJP’s ideology,” he said. The BJP padayatra was to highlight the “Left’s atrocities” in Kerala under the LDF government.

Kerala has witnessed widespread tension and violence since the killing of E. Rajesh, a 34-year-old RSS activist, in Thiruvananthapuram, the state capital.

Rajesh was on his way home after attending a RSS unit meeting when he was attacked by a group of men.

He had later died at a private hospital. The Left parties see a sinister plot in the Centre taking a keen interest in state affairs and accuse the BJP of trying to expand its footprint in the state.