As news of a crocodile being seen spread, crowds gathered on the roadside to catch a glimpse of it. 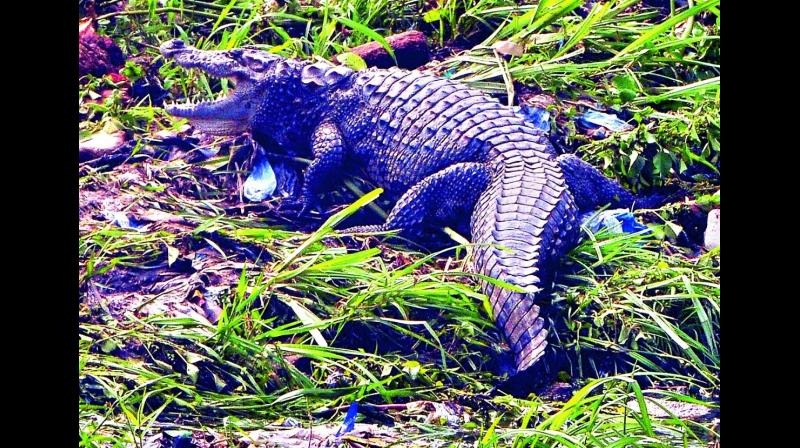 HYDERABAD: A mugger crocodile that made its appearance on the banks of the Musi river in the Old City on Thursday sent forest department officials rushing to the flooded river to capture the reptile. As news of a crocodile being seen spread, crowds gathered on the roadside to catch a glimpse of it.

It is very likely that the crocodile that was spotted on Thursday is the offspring of other mugger crocodiles that have escaped from Nehru Zoological Park in the past.

“The crocodile, which made a brief appearance on the grassy bank of the river, disappeared soon thereafter and was not spotted again. The anti-poaching team tried to locate it but it is dangerous to enter the wa-ter when a crocodile is present. We will have to wait for it to come on to the land to capture it,” A. Shankaran, officer on special duty, forest department, said.

The crocodile was first spotted by some residents in Bahadurpura, who informed the Kulsumpura police, who in turn alerted the forest department. Kulsumpura inspector P. Shankar said that police officials were immediately deployed to the location where the crocodile was reported from, to control the crowd that had gathered there and to coordinate with forest officials.

This is not the first time that a mugger has been seen in Musi river. There have been instances in the past when a few that were spotted, caught and taken to zoo.

“The ones we caught and brought to the zoo were about two or three feet long,” Dr M. Navin Kumar, former chief veterinary officer and deputy director of the zoo, told Deccan Chronicle.

From the pictures of the crocodile, it appears that it might be about three or
four feet long and could be about five years of age. “There are crocodiles in the Musi and they are also breeding, despite the water quality in the river,” he said.

The Musi muggers are very likely from the stock that escaped over the years from the zoo, he said. Some years ago, a retaining wall along a breeding pond collapsed and some of the crocodiles got scattered through the zoo.

It is possible that some of the younger ones may have made their way to the river from under the zoo compound wall through openings that are designed to allow excess water to flow out to the Musi that runs past the zoo, he said.

“Mugger crocodiles are great wanderers,” B.C. Choudhury, a former professor at Wildlife Institute of India, Dehradun, told Deccan Chronicle. “They can easily cover distances of 20 km to 30 km a day,” he said.