India   All India  18 Sep 2020  Harsimrat is SAD but speaks tenderly about NDA
India, All India 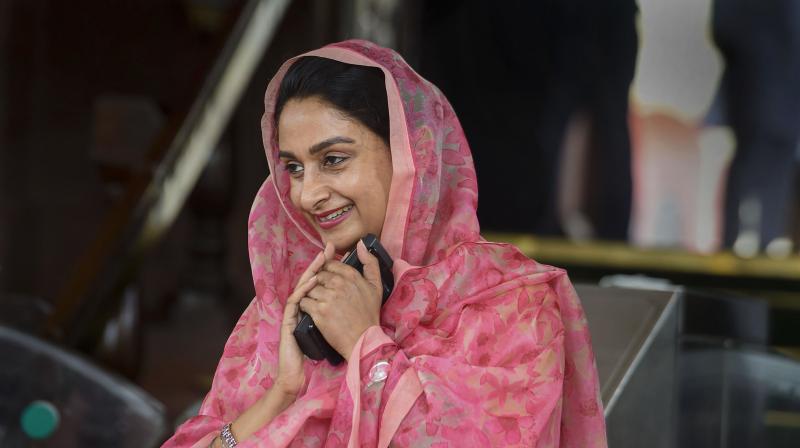 New Delhi: A day after resigning from the Union Cabinet in protest against the farm bills, Shiromani Akali Dal's Harsimrat Kaur Badal said it is her firm conviction that the legislations are against the interests of farmers though the government insists they are.

"I left my mother in ICU in the hospital to attend the Parliament debate. Thereafter I resigned in protest against these bills," Badal told PTI in an interview.

Her resignation came after her husband, the SAD president Sukhbir Singh Badal, opposed the bills in the Lok Sabha Thursday night. Harsimrat Kaur was has been the union food minister sinc 2014.

The Akali Dal voted against the bills -- Essential Commodities (Amendment) Bill, the Farmers Produce Trade and Commerce (Promotion and Facilitation) Bill, and the Farmers (Empowerment and Protection) Agreement on Price Assurance and Farm Services Bill -- which were passed by voice vote in the Lok Sabha.

Congress and several other opposition parties are opposing these bills too, while SAD is the only NDA member to come out against these legislations which seek to replace ordinances already promulgated by the government.

Harsimrat said the bills were being presenting as being in the interest of farmers but farmers themselves were apprehensive about them.

"I feel very sad that my voice was not heard in the Cabinet. If my voice had been heard, farmers would not have come out on the roads to protest," she said.

Badal insisted that the bills should be referred to a select committee of Parliament and all stakeholders should be consulted.

On her resignation, Harsimrat said "it was my duty as a representative of Punjab and of farmers."

Responding to Punjab chief minister Amarinder Singh's dig that the resignation was a "drama", she said, "Amarinder Singh and Congress are doing double-speak. When these ordinances were planned, all chief ministers were consulted and he concurred. Also, these three bills were part of the Congress party's manifesto for the 2017 Assembly elections and the 2019 Lok Sabha elections," she said.

Large-scale protests by farmers in Punjab against these measures have put the Akali Dal under pressure, culminating in the resignation of its only representative in the government.

BJP and SAD have been allies going back to the days of the Jan Sangh. Both parties have been contesting elections in alliance since 1997.

Asked whether SAD would pull out of the NDA, Badal said it was for the party to decide and a collective decision would be taken on that issue by all senior leaders together. Assembly elections are due in Punjab in 2022.

Badal had also recalled this decades-old association between the two parties in her resignation letter to Prime Minister Narendra Modi.

"The alliance formed by two legendary icons, Sardar Parkash Singh Badal and Atal Behari Vajpayee not only revived the faith of the Sikh masses in justice and fair play but also served as the most enduring guarantee of peace and communal harmony in Punjab," she said in the letter.

The government has presented these bills as pro-farmer, saying they will ensure that farmers get better prices for their produce and do not get subjected to the regulations of 'mandis'.

Agriculture minister Narendra Singh Tomar had said on Thursday in the Lok Sabha that farmers would be free to sell their produce to anyone and these bills will increase competition and promote private investment, which would help in the development of farm infrastructure and generate employment.

However, opposition parties have slammed the bills as "anti-farmer", claiming that the agriculture sector will be left to the fate of corporate interests.