There have also been instances of armed militants walking into shops to warn owners to keep shutters down. 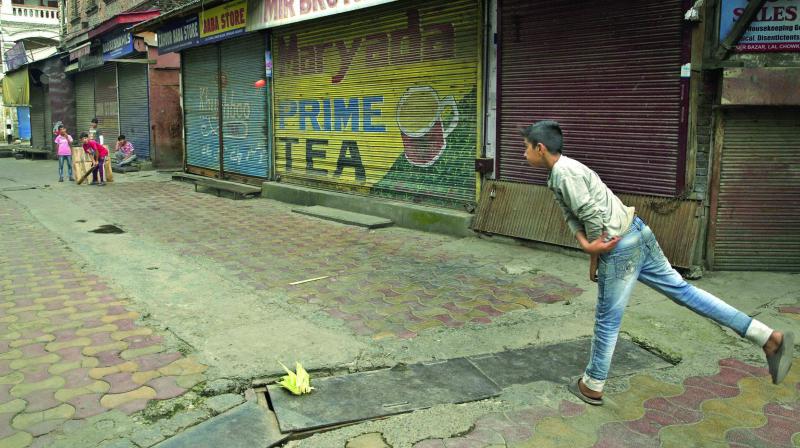 The incidents of terrorists sealing shops and posters, both handwritten and typed, being pasted in markets, mosques and other areas with do and don't diktats from different terror groups, have become a regular feature in Kashmir Valley. (Photo: Representational)

Srinagar: Armed militants are trying to spread fear among residents and defy the administration by forcibly shutting shops, sometimes by walking into the premises and intimidating owners, through threats made in posters that appear on walls overnight or by sealing shutters with tape, officials here say.

Jammu and Kashmir Police has officially kept mum with no one willing to come on record, but officials said on condition of anonymity that the situation could be slipping out of their hands.

The incidents of terrorists sealing shops and posters, both handwritten and typed, being pasted in markets, mosques and other areas with do and don't diktats from different terror groups, have become a regular feature in Kashmir Valley, they said.

There have also been instances of armed militants walking into shops to warn owners to keep shutters down and barging into Jammu and Kashmir Bank branches in south Kashmir to ask employees to stay away from work, they said.

Two shops in Modrigam village in south Kashmir's Kulgam district were recently sealed by adhesive tapes with a seal of the banned terror outfit Hizbul Mujahideen, sending shock waves in the area. And it is not just about a far-flung village or one terror group, officials said.

In Karan Nagar market in Srinagar's Civil Lines area, the words 'LW' were emblazoned on two shops followed by an insignia of the Hizbul Mujahideen.

"We want to open markets but who will guarantee our security when we return home. We have held talks with senior police officials privately but no solution to our problems is forthcoming," said a shopkeeper who did not want to be identified.

Normal life remains hit with a communications clampdown, markets and other business establishments closed, and public transport largely off the roads.

"We do not understand why police is ineffective and not acting against those creating mischief," said another shopkeeper.

In Ganderbal in central Kashmir and in Srinagar's downtown Fathekadal area, posters came up on behalf of the terror outfit Al Badar asking them to socially boycott the families of the policemen.

Several police officials said the posters were pasted at night when security deployment was low.

In another instance, a poster in English from the Musa Baba group was pasted on the wall of a shop at Srinagar's Bemina Bazar asking shopkeepers to sell essential commodities till 8.30 am.

Officials admitted that such posters were dictating the defiance against the administration. Many people were taking them seriously and preferring to remain indoors, they said.