TV visuals showed the Prime Minister greeting his mother with folded hands to seek her blessings. 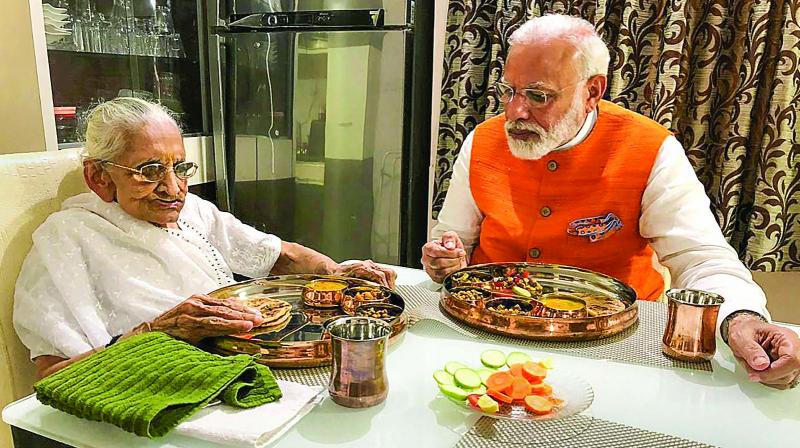 Kevadiya (Gujarat)/New Delhi: Prime Minister Narendra Modi turned 69 on Tuesday and spent his birthday in his home state of Gujarat offering prayers to goddess Narmada at the Sardar Sarovar dam filled to capacity for the first time, visiting the Statue of Unity and sharing a meal with his nonagenarian mother.

Mr Modi, who was greeted by leaders across the political spectrum, also addressed a public rally in Kevadia where he lauded the vision of Sardar Vallabhbhai Patel, saying his government drew inspiration from the country’s former home minister for its decision last month on Jammu and Kashmir in an attempt to find solution to a decades-old problem.

Mr Shah described Mr Modi as a leader with strong willpower and a symbol of decisive leadership and hard work while defence minister Rajnath Singh hailed the Prime Minister’s “visionary leadership” and said it has helped India scale new heights of glory. On his 68th birthday last year, Mr Modi was in his Lok Sabha constituency of Varanasi and spent time with schoolchildren.

A 569-kg ladoo was also unveiled at an event organised in Delhi by Sulabh International, a non-profit organisation, to mark Mr Modi’s birthday as “Swachhta Diwas” (Cleanliness Day).

Mr Modi met his mother Heeraben at her home in Gandhinagar after his public engagements.

TV visuals showed the Prime Minister greeting his mother with folded hands to seek her blessings.

Mr Modi then sat down to have a birthday lunch with her. The TV images showed the mother and son enjoying what appeared to be a Gujarati thali.

Mr Modi visited the Butterfly Garden in Kevadiya and named the saffron coloured plain “tiger butterfly” as the state butterfly.

Mr Modi began the day with a visit to the Statue of Unity and the Sardar Sarovar Dam on the river Narmada.

The Statue of Unity, billed as the tallest in the world, was inaugurated by him on Sardar Patel’s birth anniversary on October 31 last year.

He also tweeted a video of the statue taken from his helicopter.

Mr Modi reached Kevadiya on Tuesday morning to take part in the “Namami Narmada” festival being celebrated to mark the filling up of the dam to its full reservoir level of 138.68 metres.

For the first time since the height of the dam was raised in 2017, the water level reached its highest peak at 138.68 metres on Sunday evening.

Mr Modi along with Mr Rupani then performed “puja” at the dam site to “welcome” the water of river Narmada, the lifeline of Gujarat.

The Prime Minister also visited various developmental projects being carried out near the dam and the Statue of Unity to boost tourism.

These projects include river rafting, a jungle safari park, a butterfly park and Ekta Nursery, an official said.

Mr Modi visited the Khalvani Eco-Tourism site and the Dutt Mandir at nearby Garudeshwar village on the banks of Narmada.

“The country has taken an important decision with the inspiration of Sardar Patel, to walk a new path to resolve a decades-old problem,” Mr Modi told the public rally at Kevadiya.

Mr Modi also referred to Hyderabad Liberation Day, saying this event is a result of Sardar Patel’s vision. September 17 marks the day in 1948 when the erstwhile Hyderabad State was annexed to the Indian Union.

Mr Modi said he was happy to see the rising number of visitors thronging the Statue of Unity.

While the average number of daily visitors to the 133-year-old Statue of Liberty is 10,000, around 8,500 people visit the 11-month-old Statue of Unity each day, he added.

The Sardar Sarovar project is catering to needs of Gujarat, Madhya Pradesh, Maharashtra and Rajasthan and has benefited people in these four states, he said.

Mr Modi thanked “the lakhs of people” who worked to make Sardar Sarovar project a success and offered them his salutations.

Dwelling on the ecological impact of big projects, Mr Modi said, “Our culture believes in development while protecting environment. Nature is our jewel and is very dear to us.”

Mr Modi said the focus now is on ‘per drop more crop’ in agriculture.

In 2001, only about 14,000 hectares land were covered under drip and micro irrigation in Gujarat but now it has increased to 19 lakh hectares, Mr Modi said, highlighting the “per drop more crop” campaign launched while he was the state chief minister.

At separate events in Delhi, BJP leaders cut 69-kg and 370-kg cakes, symbolising his age and scrapping of Article 370 of the Constitution.