India   All India  18 Sep 2019  Doctor wins hearts by carrying patient on cot for 5 km in Odisha
India, All India

Realising that the woman had suffered excess blood loss, the doctor carried out the delivery process at the village. 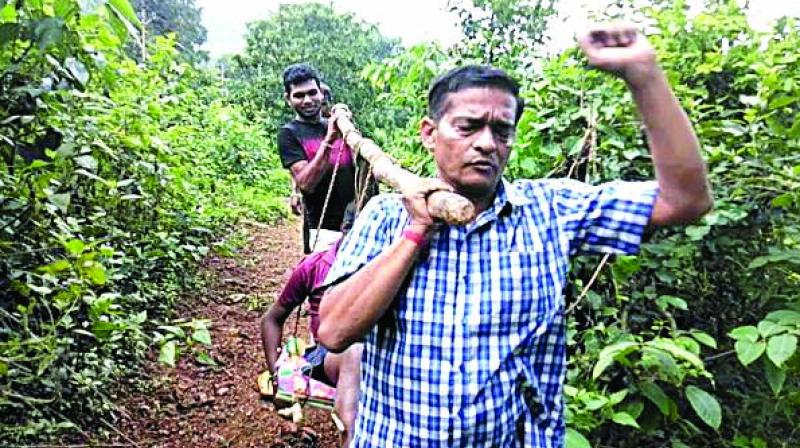 BHUBANESWAR: An Odisha doctor has set an example by carrying a patient on sling for 5 km to make the latter board an ambulance.

According to reports, a 12-year-old boy of Nuaguda village under Khairput block in Malkangir district was suffering from fever. His family members telephoned the ambulance service for admitting him to a nearby hospital.

However, the emergency vehicle was unable to reach village due to lack of motorable road. In the meantime, Shakti Prasad Mishra, a doctor working with Arogya Plus, a non-governmental organisation, rose to the occasion by carrying the minor boy on a sling for 5 km along with the ambulance driver through hilly terrain and made the patient reach near the ambulance.

The boy was then taken to the Malkangiri district headquarters hospital for treatment. Dr Mishra has earned accolades from all quarters for the exemplary act.

On November 3, 2018, a young doctor working in Odisha’s Maoist-hit Malkangiri district had also set a similar example for others by carrying a pregnant woman from an inaccessible village to hospital on a cot.

Dr Omkar Hota, who is posted at Paplur hospital under Chitrakonda block, 150 km from district headquarters hospital, got information that a woman at Serigeta village was complaining serious labour pain.

Without making any delay, Dr Hota along with an attendant rushed to the village that lacked good road connectivity.

Realising that the woman had suffered excess blood loss, the doctor carried out the delivery process at the village.