Tamil Nadu BJP chief Soundararajan answers the question but does not turn around to see the man who posed the question. 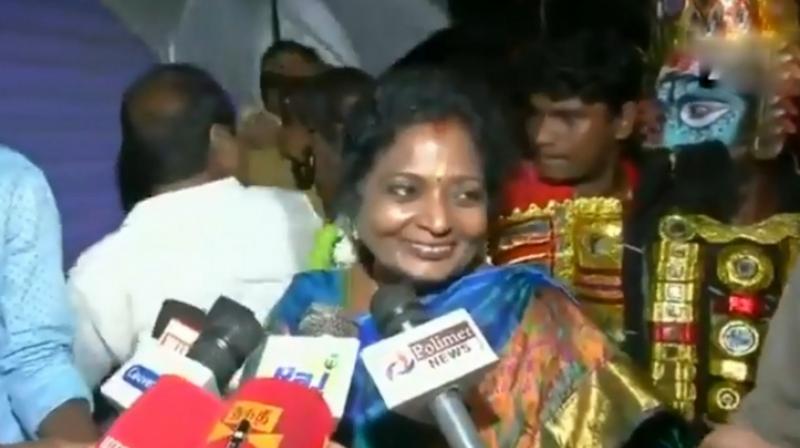 A man can be heard asking Soundararajan about the rising fuel prices and immediately a party functionary shoves him aside. (Photo: ANI screengrab)

In the brief clip, a man emerges from behind the gathering and moves towards Soundararajan fielding questions from reporters.

He can be heard asking her about the rising fuel prices and immediately a party functionary shoves him aside.

Soundararajan answers the question but does not turn around to see the man who posed the question.

She was speaking to reporters after the conclusion of a cultural event in Chennai involving folk artistes in the early hours to celebrate Prime Minister Narendra Modi's birthday.

When contacted, the BJP state unit chief told news agency PTI, "The man was not manhandled as is being claimed by some channels. I did not even see him, but I did answer his question."

Since the identity of the man was not known and as it was about 12:30 am, party workers as part of security measures took him away, she said.

Later, the auto driver told reporters that he was "misunderstood," by the BJP men.

"I only tried to vent my grievance. The petrol price hike is hurting drivers like me more." He said he does not own an autorickshaw and only hires it for a daily fee.

"We have to buy fuel at a high cost and try to make ends meet which is becoming impossible," he added.