The CJI told the counsel “We entertained the case on the foundations of liberty, which is sacrosanct. 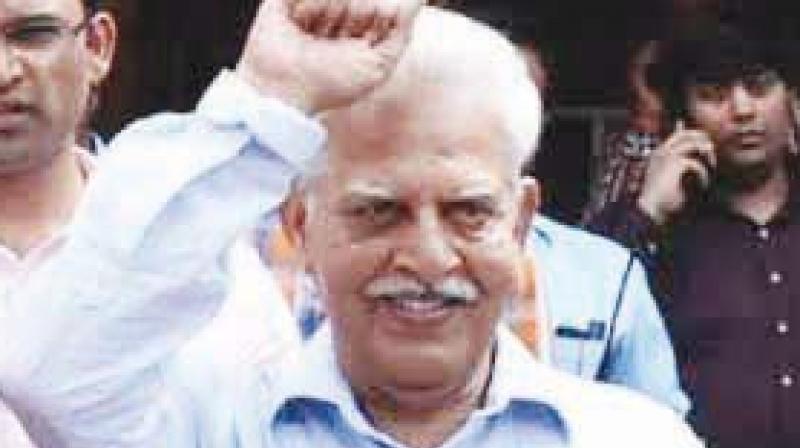 New Delhi: The Supreme Court on Monday observed that it would examine the materials submitted by the Maharashtra government in the arrest of the five human rights activists on September 19, and that if prima facie ground is established against their involvement, it would set up a special investigation team for a probe.

Chief Justice Dipak Misra, heading a three-judge bench, made this oral observation when senior counsel Abhishek Manu Singhvi, appearing for the five activists, insisted on a probe by a SIT or a court-monitored probe into their arrest on August 28 for their alleged role in the Bhima-Koregaon violence.

The CJI told the counsel “We entertained the case on the foundations of liberty, which is sacrosanct. Issues like independent inquiry etc, can come at a later stage. If the material relied on by the Pune Police are found to be “cooked up”, then we may even quash the charges against them.”

The Chief Justice said, “The court cannot be expected to make up its mind unless it saw all the material evidence against the activists. First of all, we must have a look at the material. If we see the material and find it is cooked up, we will definitely order the setting up of an SIT... the debate here has to be whether the Criminal Procedure Code was violated. Wherever this court has appointed SIT, there has been grave violation.”

The bench, which included Justices A.M. Kanwilkar and D.Y. Chandrachud, was hearing petitions filed by Dr. Romila Thapar and others, challenging the arrest of the five activists. On August 29, the court had directed that they be kept under `house arrest’ and it has been extended till September 19, when it would examine the materials. The bench posted the matter for a final hearing on Wednesday and asked the parties to submit a brief note on the propositions of law that has to be decided in this case.

The five activists, Varavara Rao, Sudha Bhardwaj, Arun Ferreira, Vernon Gonsalves and Gautam Navlakha were taken into custody from different parts of the country. At one stage the CJI suggested that the activists, who had filed petitions in high courts, could pursue their remedy and till then the ‘house arrest’ could be continued. But Dr. Singhvi insisted that the apex court should first hear the petitioners and then decide. Additional solicitor general Maninder Singh, appearing for the Centre, had told the court at the outset that the problem of “naxalism” has gripped the country and questioned the apex court for entertaining the petition at the behest of third parties.

He ASG had said, ”I (Centre) have come here because the problem of naxalism is not confined to one state, but affects the entire nation. I have come here considering the overall situation in the country. The menace of maoists and naxalites is increasing day by day, and it is these accused persons who are responsible for the increasing threat of anti-social activities.”

Mr. Singh asked the court why the petitioners decided to move the Supreme Court directly. “Is it that the police are not properly investigating the case against the accused under the Cr.P.C, or is it that the lower courts are not dealing with the case. What is the grievance that has made them flout basic procedure and move the Supreme Court directly?”