The 130-kilometre India-Bangladesh Friendship Pipeline Project will connect Siliguri in WB and Parbatipur in Dinajpur, Bangladesh. 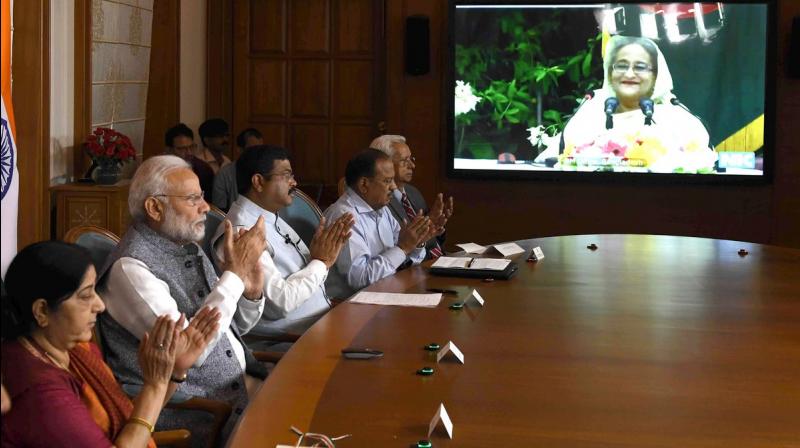 Besides the pipeline, the two leaders also inaugurated the construction of the third and fourth dual-gauge rail lines in Dhaka-Tongi section and the dual-gauge rail line in Tongi-Joydebpur section of Bangladesh Railway. (Photo: Twitter | @PIB_India)

New Delhi/Dhaka: Prime Minister Narendra Modi on Tuesday described the cooperation between India and Bangladesh as an example for the world as he and his Bangladeshi counterpart Sheikh Hasina jointly inaugurated the construction of a friendship pipeline project through video conferencing.

The 130-kilometre India-Bangladesh Friendship Pipeline Project will connect Siliguri in West Bengal in India and Parbatipur in Dinajpur district of Bangladesh. The 346 crore rupees project will be completed in 30 months and the capacity of the pipeline will be one million metric tons per annum.

Both countries had entered into an agreement for the pipeline construction in April this year during Foreign Secretary Vijay Gokhale's visit to Dhaka.

Modi said Dhaka-Tongi-Joydebpur Railway project will improve connectivity between the two countries and generate more revenue. He expressed confidence that the proposed railway project will contribute to the process of strengthening national and urban transport in Bangladesh, the statement said.