Ashok Kumar Tomar, father of the accused, was suspended for allegedly threatening the family of the victim, police said. 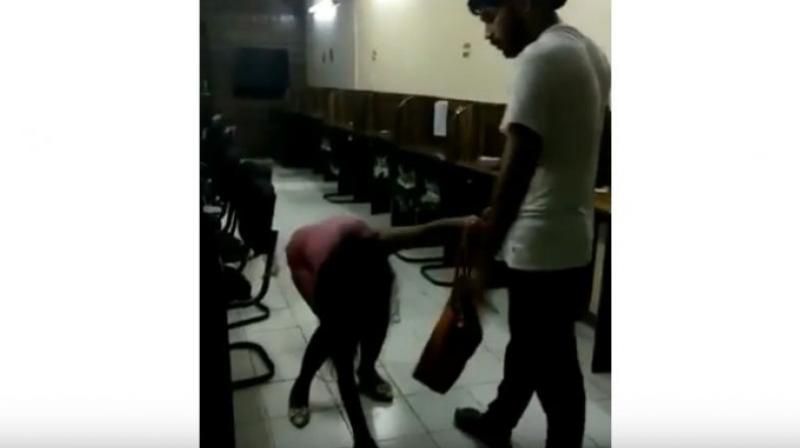 Rohit Tomar was seen brutally thrashing and kicking the woman with his knees and dragging her by her hair as she pleads for mercy. (Photo: YouTube | Screengrab)

New Delhi: The Delhi police on Monday suspended an assistant sub-inspector, whose son was seen brutally thrashing a woman in a video which went viral on social media.

Ashok Kumar Tomar, who was posted in the central district, was suspended for allegedly threatening the family of the victim, police said.

Rohit Tomar, the 21-year-old son of the policeman, Ali Hasan, the owner of the call center where the incident happened, and Rajesh, a peon who worked there and shot the video, have been taken into police custody for questioning in connection with the case filed at the Uttam Nagar police station.

The Delhi Commission for Women has issued a notice to the city police in this regard.

Two cases were registered against the main accused - one of criminal intimidation and molestation and the other of rape - based on complaints of two women, police said.

The first case was registered on Thursday at the Tilak Nagar police station in West Delhi following a complaint by Tomar's woman friend alleging that he showed her a video in which he could be seen thrashing a woman, police said.

Tomar allegedly threatened her with the same kind of treatment if she did not follow his instructions.

The second case was registered at the Uttam Nagar police station after another woman, who was seen in the video, approached police on Friday alleging that on September 2, Tomar had called her to his friend's office in Uttam Nagar and raped her.

In the video, Tomar is seen thrashing the woman when she threatened to file a police complaint against him.