India   All India  18 Sep 2018  Modi in Varanasi on his 68th birthday, interacts with school students
India, All India

Modi in Varanasi on his 68th birthday, interacts with school students

The Prime Minister also gave small gifts to the children who had welcomed him enthusiastically saying “Swagatam PM”. 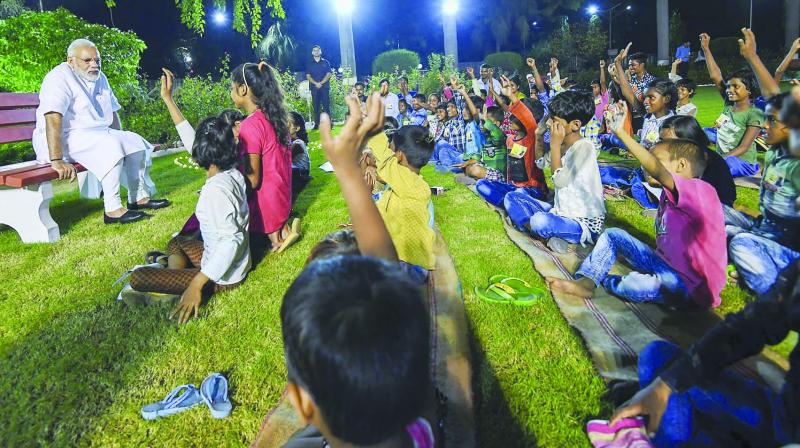 Lucknow: For Prime Minister Narendra Modi, it was a unique and memorable 68th birthday celebration in Varanasi on Monday as he spent time with 300 primary school students at Narur village and shared secrets of success with the little ones who gifted him handmade cards and flowers.

The children addressed the Prime Minister as “Kaka Modi” who spoke to them about the importance of education, cleanliness and fitness during the interaction at the school supported by NGO Room to Read.

“Be fearless and don’t hesitate in asking questions as it is a key aspect of learning,” Mr Modi told the children who were excited to host the special guest. He explained the importance of Lord Vishwakarma to the children and linked it to skill development.

Calling the children “future of India”, Mr Modi asked them to involve themselves in physical exercise so that they sweat at least four times a day. “Jo khelta hai, wahi khilta hai” (the one who plays is the one who blooms),” he said, advising them to pro-gress by putting in hard work and never get disheartened by obstacles.

The Prime Minister also gave small gifts to the children who had welcomed him enthusiastically saying “Swagatam PM”.

One student asked the Prime Minister to visit her village and said that she had been waiting for him to come. Mr Modi explained to her about his busy schedule.

Mr Modi also met children engaged in rag-picking for a living and  students of the Banaras Hindu University (BHU) and Kashi Vidyapeeth who teach these street children in their free time.

A group of “divyang” children were also among those who met the Prime Minister and saw a short film Chalo Jeete Hain that is based on Mr Modi’s life.

A constituency tour and a prayer session at Kashi Vishwanath temple were also lined up for Mr Modi, a party leader said.

Meanwhile, the state government announced the release of 68 old and ailing prisoners to mark the 68th birthday of the Prime Minister.

Mr Tewari, who is a minister in the Yogi Adityanath government, said, “Special prayers were offered in 68 temples to pray for the long life of the PM. About a thousand earthen lamps were lit at 90 locations.”

Medical camps were held at 72 places and a cleanliness drive was launched on the streets leading to various ghats in the city, including the Ganga ghat and the Vishwanath Temple.

At Panini Kanya Vidyalaya, a “yajna” (special worship) was conducted for the Prime Minister’s long life, he said.

Earlier, on his arrival, the Prime Minister was received at the airport by Mr Adityanath and state BJP president Mahendra Nath Pandey.

On Tuesday, Mr Modi will inaugurate or lay the foundation stone of various development projects, cumulatively worth more than `500 crore, according to a statement issued by the Prime Minister’s Office (PMO).

The event will be held at the amphitheatre of the BHU. Among the projects to be inaugurated by Mr Modi are integrated power development scheme (IPDS) for Puraani Kashi and an Atal incubation centre at the BHU.