India   All India  18 Sep 2017  Is CBI shielding bigwigs in probe into ponzi schemes?
India, All India

Is CBI shielding bigwigs in probe into ponzi schemes? 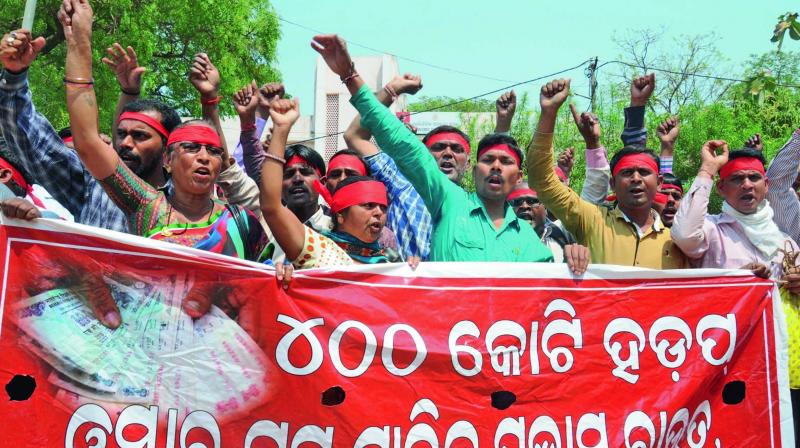 Duped investors at a rally in Bhubanewar protest against the Odisha government’s alleged inaction to ensure refund of money collected by chit fund firms.

Bhubaneswar: The Central Bureau of Investigation (CBI) which is probing the Odisha chit fund scam, seems to have discontinued in recent times its action against top politicians, IAS, IPS officers and other influential persons, including journalists, whose names have been doing the rounds in connection with the chit fund scams.

While CBI sources deny any loss of momentum in the probe, duped investors and leaders of BJP and Congress  allege that the investigators seem to have lost interest after or is shielding the bigwigs after the initial rush to catch the guilty.

The Central probe agency has not grilled any big shot in the past few months, despite having strong leads about the involvement of politicians, bureaucrats and influential persons in the scam that has affected lives of over 20 lakh small depositors.

While Mr Hansda and Mr Tripathy were arrested, the CBI had served notice to Mr Das Burma to appear before it for his alleged links with Artha Tatwa Group. It is not yet known what kind of links Mr Das Burma had with the ponzi firm.

The CBI had arrested two Trinamul Congress MPs — Sudip Bandyopadhyay and Tapas Paul — for their alleged links with Rose Valley Group that operated in Odisha. Besides, it had brought to Odisha on remand Sudipto Ray, chairman of Saradha Group that is allegedly involved in similar wrongdoings in West Bengal.

Subhankar Nayak, an alleged middlemen working for Seashore, was arrested by CBI on Nov. 18, 2014. He had mentioned names of IAS officers, IPS officers, MPs and MLAs as his beneficiaries in his diaries seized during raids.

In one of the four diaries, Nayak wrote that four SPs, one DIG, two collectors and several politicians were paid by the Seashore Group to protect the illegal money circulation business. The CBI submitted excerpts from the diary in the court of special CJM (CBI) on Nov. 18, 2016.