Air Chief B.S. Dhanoa described the late Marshal of the Indian Air Force as a legend, icon, philanthropist and flying chief who led from the front. 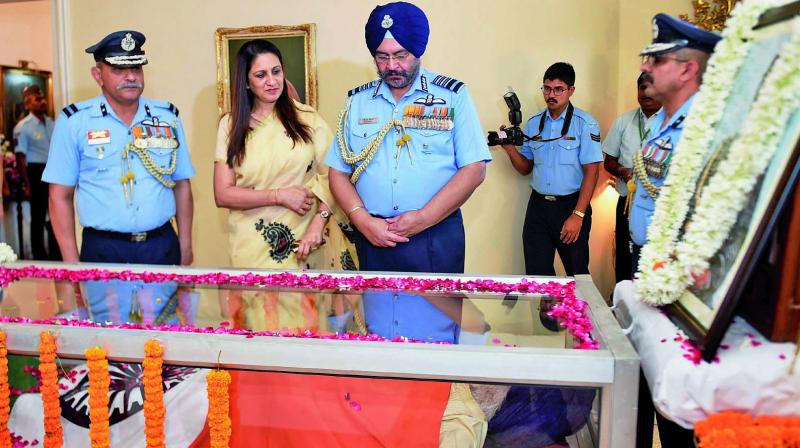 IAF chief Air Chief Marshal B.S. Dhanoa pays his last respects to Marshal of the IAF Arjan Singh in New Delhi on Sunday. Air Chief Marshal Dhanoa paid tribute to the 1965 war hero, saying: “IAF yesterday lost a legend and icon. When I was a young boy I was inspired by the then Chief of Air Force Arjan Singh.” (Photo: PTI)

New Delhi: The home ministry on Sunday said state funeral will be accorded to Marshal of the Indian Air Force Arjan Singh and the national flag will fly at half-mast at all government buildings here on Monday in his honour. Top leaders of the country also paid respects to the air veteran praising him for his contribution to the armed forces.

The last rites of Singh, who passed away at the Army’s Research and Referral Hospital on Saturday, would be performed at Brar Square here at 10 am on Monday.

“As a mark of respect to the departed dignitary, a state funeral will be accorded and national flag will fly half-mast on the day of the funeral (September 18) in Delhi at all buildings where it is flown regularly,” a home ministry spokesperson said.

The defence ministry said Singh’s mortal remains will be taken to the funeral site from his residence in a gun carriage procession on Monday. It said a gun salute will be given and a fly past will be organised before the final rites.

Arjan Singh, the hero of the 1965 India-Pakistan war and the only Air Force officer to be promoted to five-star rank, died here on Saturday at the age of 98.

Meanwhile, Air Chief B.S. Dhanoa described the late Marshal of the Indian Air Force as a legend, icon, philanthropist and flying chief who led from the front. Air Chief Dhanoa said as a young boy he was inspired by the five-star officer.

“IAF on Saturday lost a legend and icon. When I was a young boy I was inspired by the then Chief of Air Force Arjan Singh,” he said.

He recalled Singh’s immense contribution during the 1965 Indo-Pak war, the first major air battle the IAF fought after Independence.

“It was to his credit that despite initial setbacks we were able to overcome and overwhelm the enemy and spoil their design to annex Jammu and Kashmir,” Air Chief Dhanoa said.

Singh kept his flying category even while he was the Chief of Air Staff, a distinctive quality that Dhanoa also alluded to. “He was a flying chief and at many times he used to fly aircraft. When he used to go for inspections to units he would fly in his own aircraft. He has flown multiple aircraft and the last one was MiG21 when he was leaving the IAF,” the Air Chief said.