About 120 Indian diplomats and security personnel were flown back from Kabul, through a longer route via Iranian airspace to avoid Pakistan 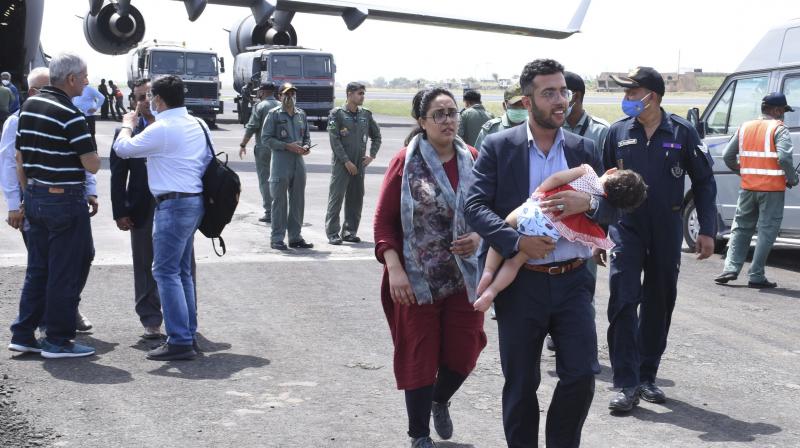 An Indian embassy staff member with his family arrives at Air force base, in Jamnagar, India, Tuesday, Aug. 17, 2021. A special military flight with Indian officials landed in Gujarat after taking off from Kabul's main airport on Tuesday. (Gujarat State Information Office via AP)

New Delhi: Indian diplomats in Kabul, including ambassador Rudrendra Tandon as well as security personnel, were flown back to New Delhi in two phases by Tuesday afternoon by Indian Air Force (IAF) C-17 Globemaster aircraft, after New Delhi decided it was just too dangerous for Indian diplomats to remain in Kabul after the Taliban takeover. Prime Minister Narendra Modi, meanwhile, presided over a meeting of the Cabinet Committee on Security (CCS) to review the fast-moving developments in that country, which was attended by, among others, defence minister Rajnath Singh and national security adviser Ajit Doval. The home and finance ministers were also present.

As external affairs minister S. Jaishankar was travelling to the United States, foreign secretary Harsh Vardhan Shringla attended. Also present was India’s ambassador to Afghanistan, Rudrendra Tandon, who came back to India on Tuesday itself. Sources said Mr Tandon directly briefed Mr Modi and the CCS on the actual ground situation in Afghanistan.

About 120 Indian diplomats and security personnel were flown back to India from Kabul -- through a longer route via Iranian airspace to avoid Pakistan -- to the Hindon airbase at Ghaziabad near Delhi after they first landed at Jamnagar in Gujarat. There is now no Indian diplomatic presence left in the strife-torn nation.

External affairs minister S. Jaishankar, meanwhile, tweeted that the movement of the Indian ambassador and the embassy staff from Kabul to India had been a “difficult and complicated exercise” and “thanked all those whose cooperation and facilitation made it possible”. The Indian diplomats apparently faced problems initially while travelling from the Indian embassy to the airport due to the presence of Taliban-controlled checkpoints, but sources said there was no specific targeting of Indian diplomats on their way to the airport. New Delhi was also coordinating with the United States, which is currently controlling Kabul airport, amidst reports that Mr Doval had spoken to US national security adviser Jake Sullivan.

Mr Jaishankar also spoke to US secretary of state Antony Blinken and underlined the urgency of restoring airport operations in Kabul while “deeply appreciating the American efforts underway in this regard”, with the Indian government saying “the main challenge for travel to and from Afghanistan is the operational status of Kabul airport” and adding that it is “committed to the safe return of all Indian nationals and will institute flight arrangements once Kabul airport is open for commercial operations”. The MEA has already constituted a “Special Afghanistan Cell” to process repatriation requests. New Delhi also thanked France for evacuating 21 Indian nationals from Kabul to Paris.

Other immediate problems too remain for New Delhi, including that “a number of” Indian citizens employed by third countries are still stranded in the strife-torn nation, with New Delhi saying its “immediate priority is to obtain accurate information about all Indian nationals currently in Afghanistan”, and adding that these Indian nationals or their employers “are requested to urgently share the relevant details with the MEA’s Special Afghanistan Cell” that has been constituted. New Delhi also said visas for Afghan nationals would be given through an e-emergency visa facility and that India has already received requests from Afghan Sikh and Hindu community leaders. Some media reports cited some of the stranded Indian citizens there as saying their passports had been taken away by the companies that had employed them.

In a statement, the MEA said: “In view of the prevailing situation in Kabul, it was decided that our embassy personnel would be immediately moved to India. This movement has been completed in two phases and the ambassador and all other India-based personnel have reached New Delhi this afternoon.”

On Indian citizens still in Afghanistan, the MEA said: “We have been issuing periodic travel and security advisories for all Indian nationals in Afghanistan, given the deteriorating security situation there. Those already in Afghanistan were urged to return immediately while others were advised not to travel there. Nevertheless, we understand that a number of Indians are stranded in that country, some of whom are employed by third country organisations. Our immediate priority is to obtain accurate information about all Indian nationals currently in Afghanistan. They and/or their employers are requested to urgently share the relevant details with the MEA’s Special Afghanistan Cell.”

The MEA further said, “As regards Afghan nationals, our visa services will continue through an e-emergency visa facility, which has been extended to Afghan nationals. This can be accessed through our e-visa portal at https://indianvisaonline.gov.in/evisa/Registration. We have already received requests from Afghan Sikh and Hindu community leaders and are in touch with them.”