Clashes in Assam, curfew imposed in parts of Barak Valley

Several people including two police personnel were injured in the incident, and they were rushed to nearby hospital 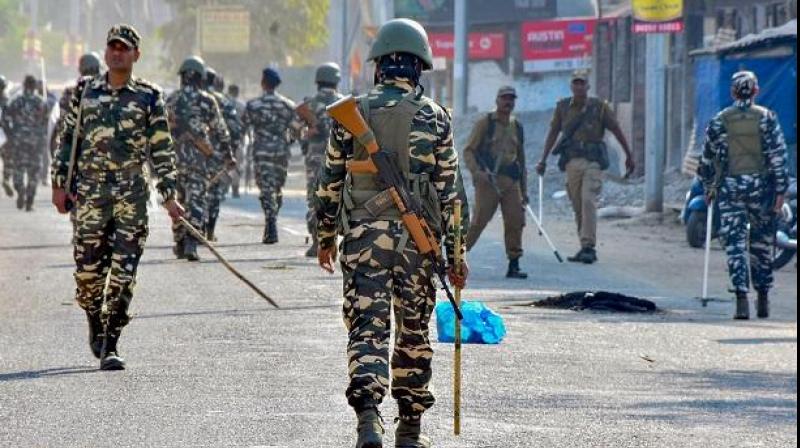 The police and other security personnel rushed to the area and brought the situation under control. (Representational image: PTI file)

Guwahati: The Assam administration on Tuesday imposed curfew in some parts of the state’s Hailakandi district in the Barak Valley after a clash between two communities on Monday night in which several people, including two police personnel, were wounded.

In view of the simmering tension after the clash, Hailakandi district magistrate Rohan Jha imposed the curfew in the Serispore tea garden, Narainpur Part-II village, Itarkandi Part-I village and Chandpur village from 10 pm on August 16 until further orders.

Security sources said a clash broke out at the Serispore tea garden area on Monday night after a minor altercation between an e-rickshaw driver and his passengers. Soon after the clash, people of two different communities gathered in the area and allegedly attacked each other with stones and sharp weapons.

Some people had also allegedly vandalised a few shops and business establishments nearby.

When a police team reached the area to control the situation, they also allegedly came under attack.

Several people including two police personnel were injured in the incident, and they were rushed to nearby hospital. Later, the police and other security personnel rushed to the area and brought the situation under control.

Algapur MLA Nizam Uddin Choudhury, who is from the area, appealed to people to maintain peace and tranquillity. He said: “Soon after I came to know about the incident, I spoke with the superintendent of police and deputy commissioner of Hailakandi district. I also spoke to the chief minister and guardian minister Parimal Suklabaidya and apprised them about the incident. I appeal to the people of Serispore area: please don’t take the law into your own hands. Whatever happened will be thoroughly investigated and action will be taken against the culprits. I appeal to the people to maintain peace.”