The security forces fired teargas canisters and reportedly also pellet shotguns to disperse the stone-pelting mobs at a few places. 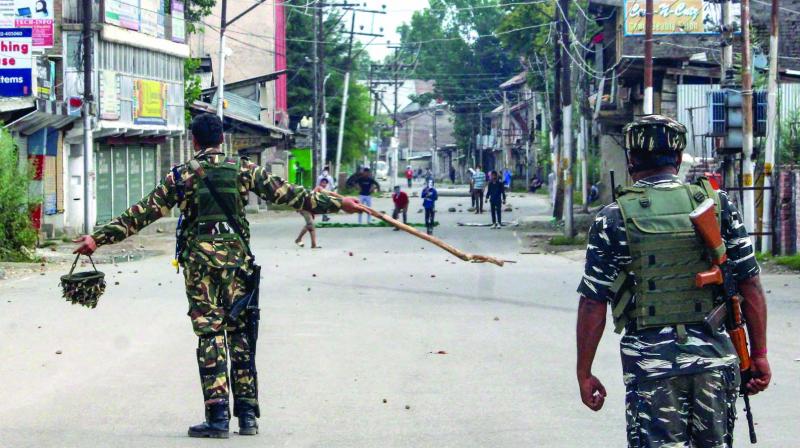 Security personnel react as youth hurl brickbats on them during restrictions in Srinagar on Friday. (Photo: PTI)

Srinagar: Fresh protests erupted in Srinagar and some other parts of Kashmir on Saturday after the authorities eased restrictions on the movement of people in the Valley. At places, irate crowds of mainly youth clashed with the security forces, leaving a large number of people injured.

The security forces fired teargas canisters and reportedly also pellet shotguns to disperse the stone-pelting mobs at a few places.

However, Jammu and Kashmir government spokesperson Rohit Kansal said that only eight people were injured in six to seven such incidents and that in none of these more than 30-40 stone-pelters took part. He also claimed, “These incidents didn’t happen in the areas, where relaxation was given.”

He said that no untoward incident was reported from the areas, where security restrictions were eased. He said that the process of easing curbs would continue in these areas on Sunday also.

While central Srinagar and its neighbourhood continued to be tense with security forces in riot-gear patrolling the streets and enforcing restrictions, the civil lines area and peripheries of the summer capital witnessed an increased movement of people and plying of private cars and two-wheelers. Skeleton public transport service, mainly Sumo cabs, was also available for the first time in two weeks.

Some shops, mainly groceries and pharmacies, in the civil lines areas of the city and its neighbourhood opened on Saturday morning. Some fuel stations were also serving customers.

Mr Kansal said that relaxation was given in 35 police station areas across the Valley. He said that easing in restrictions resulted in people coming out besides private vehicle plying on roads in the areas where relaxation was given. He said, “We expect that the areas and regions in which prohibitory orders were relaxed today will see relaxation tomorrow also. The local authorities will assess (the situation in) fresh areas which can be considered for relaxation in prohibitory orders.”

While mobile and internet services remained shut in the Valley and most parts of Jammu region, these have been restored partially in a few districts of Jammu.

The government spokesman said, “In Jammu division, landlines services are functioning normally, besides, mobile services have also been restored in five districts there”.

Mr Kansal reiterated that the government has planned to reopen primary level schools in the Valley on Monday “for which necessary arrangements are being made”.

Entire Kashmir Valley and parts of the state’s Jammu region were under security clampdown since August 5, when home minister Amit Shah moved a resolution in Parliament to see abrogation of the special status for Jammu and Kashmir under Article 370 of the Indian Constitution and a bill for splitting the state into two Union Territories.

All means of communication, including mobile and landline phones and internet were severed simultaneously. Also, the police went on an arrest spree, across the state and among the incarcerated are leaders and prominent activists of mainstream political parties.

On Friday, the government decided to lift restrictions imposed in the state in a phased and gradual manner.

Inspector general of police (Kashmir Range) S.P. Pani said on Saturday that the administration is calibrating the situation and in this regard, easing is done in gradual manner.