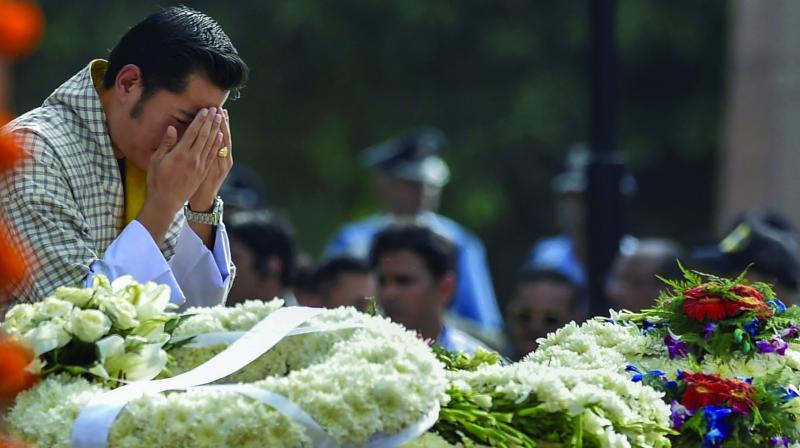 MEA spokesperson Raveesh Kumar tweeted, “When neighbours came together to express the sense of loss on sad demise of a statesman! His Majesty King of Bhutan, former President of Afghanistan and Ministers from Nepal, Bangladesh, Pakistan and Sri Lanka came to Delhi to pay tributes to former PM Shri Atal Bihari Vajpayee.”

Mr. Pompeo said, “On behalf of the people of the United States of America, I extend my heartfelt condolences to the people of India on the recent passing of Former Prime Minister Atal Behari Vajpayee. We know that many Indians will reflect on Prime Minister Vajpayee’s many contributions that led to India’s rise as a global and economic power.  He championed tirelessly for his country’s development and demonstrated a devotion to improving the lives of every Indian.”

Mr. Pompeo added, “Standing before the United States Congress in 2000, he famously characterised U.S.-India ties as a “natural partnership of shared endeavours.”

US defence secretary Mike Pompeo recognised early on that the United States and India, based on their shared democratic values, could develop a partnership that would contribute to the economic prosperity and security of the region and the world.  Today, our two countries and our bilateral relationship continue to benefit from Prime Minister Vajpayee’s vision, which helped promote expanded cooperation. The American people and I stand with the people of India as we mourn Prime Minister Vajpayee’s passing. Today, we hold the people of India in our thoughts and prayers."

In its reaction, the French Foreign Ministry said, “It was with deep grief that we learnt of the demise of former Indian Prime Minister Atal Behari Vajpayee. France offers its condolences to his family as well as the Indian authorities and people. Poet, politician, visionary, he left his mark on India’s history. His name remains linked to the Indo-French friendship, which he shaped by launching the strategic partnership that has united our two countries since 1998.”