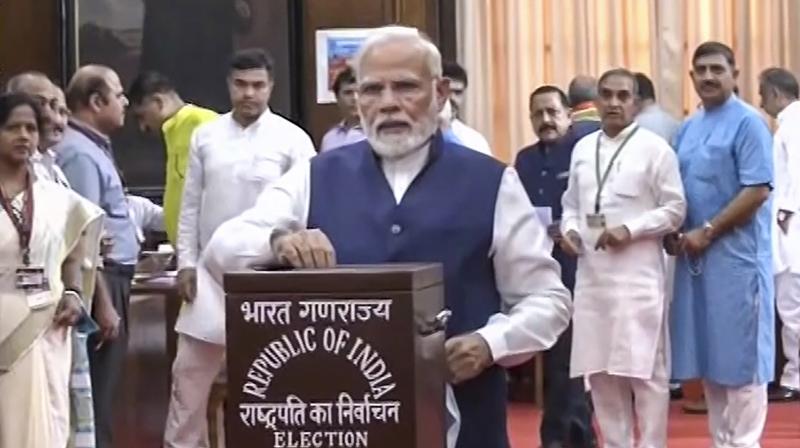 Polling began at 10 am and Prime Minister Narendra Modi was among the first to cast his vote. The voting process would conclude at 5 pm.

Besides Room number 63 on the first floor of Parliament House, which has been converted into a polling station, voting is simultaneously taking place at various state assemblies.

In the national capital, voting is also underway at the Delhi legislative assembly.

Counting of votes will be held on July 21.

The system of secret ballot is followed in the presidential election, and parties cannot issue whips to their MPs and MLAs with regard to voting.

The value of the vote of a Member of Parliament has gone down to 700 from 708 in this presidential poll due to the absence of a legislative assembly in Jammu and Kashmir.

In accordance with the system of proportional representation by means of single transferable vote, every elector can mark as many preferences, as there are candidates contesting the election.

These preferences for the candidates are to be marked by the elector, by placing the figures 1,2,3, 4, 5 and so on, against the names of the candidates, in the order of preference, in the space provided in column 2 of the ballot paper.

Separate colours help the returning officer ascertain the value of vote of each MLA and MP.

Seeking to maintain secrecy of voting, the EC has issued a specially designed pen with violet ink to enable voters mark their ballot papers in the presidential poll.