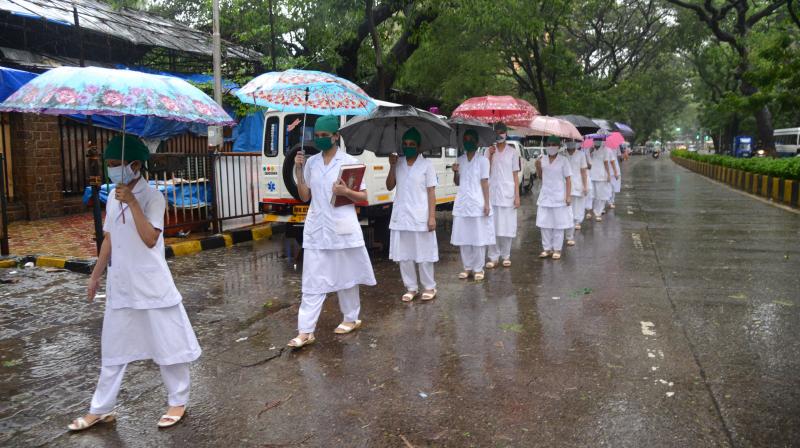 Nurses walk to work at KEM Hospital on a rainy day in Mumbai. India on July 17 became the third country in the world to record one million coronavirus cases, following Brazil and the United States. Experts said the number of cases is expected to shoot up to 2 million in barely another three weeks. (DC Photo: Rajesh Jadhav)

However, the real worry is about India crossing the next million cases in less than three weeks' time. According to health economist Rijo M John, total COVID-19 cases in India is projected to cross 2 million around August 10-11 and 3 million by 28-29. He said about 3.2 million cases are  expected by August 31. He said that the projection is conservative and based on trends in growth. He had on June 8 said India would cross 1 million around July 22, which the country crossed on July 16th.

Of the 671 deaths reported in the last 24 hours, 258 are from Maharashtra, 115 from Karnataka, 79 from Tamil Nadu, 42 from Andhra Pradesh, 38 from Uttar Pradesh, 26 each from West Bengal and Delhi, 17 from Gujarat, nine each from Jammu and Kashmir and Punjab, and eight each from Madhya Pradesh and Rajasthan.

Telangana has reported seven fatalities followed by Haryana with five deaths, Jharkhand, Bihar and Odisha reported four each, Assam and Puducherry have registered three each, Chhattisgarh and Goa reported two each while Kerala and Uttarakhand have registered a fatality each.

Puducherry has registered 25 deaths, Chhattisgarh 23, Goa 21, Himachal Pradesh and Chandigarh 11 each, Arunachal Pradesh and Tripura three each, Meghalaya and Dadra and Nagar Haveli and Daman and Diu two each while Ladakh has reported one fatality.

Officials of the health ministry said that the demand for hospital beds has reduced due to effective disease management strategy and now very few need ventilator or oxygen support compared to May and June.

“India, being the second most populous country in the world with 1.35 billion people, has 727.4 cases per million. On the global scale, cases/million population in India are 4 to 8 times less than some European countries,” said health ministry officials. They said that Russia has 8 times and the United States 16 times higher cases per million compared to India. Officials underlined the case fatality rate at 18.6 deaths/million of the country is one of the lowest in the world.

“Timely detection of the infected persons has helped in early treatment too. The effective clinical management strategies have shown to yield positive results. Almost 80% of the asymptomatic and mild cases have been advised home isolation under medical supervision. The strategy of home isolation for the mild and asymptomatic patients has ensured to keep the hospitals unburdened, where the focus has been on treatment of the severe cases and reduction of fatality. It is also notable that less than 1.94 per cent of the cases are in ICUs, 0.35 per cent cases are on ventilators and 2.81 per cent cases are on Oxygen beds,” said the officials.