India   All India  18 Jul 2019  We will once again call upon Pak to release Kulbhushan Jadhav: Jaishankar in RS
India, All India

We will once again call upon Pak to release Kulbhushan Jadhav: Jaishankar in RS

The bench also ruled by 15 votes to 1 that Pakistan had violated India's rights to consular visits after Jadhav's arrest. 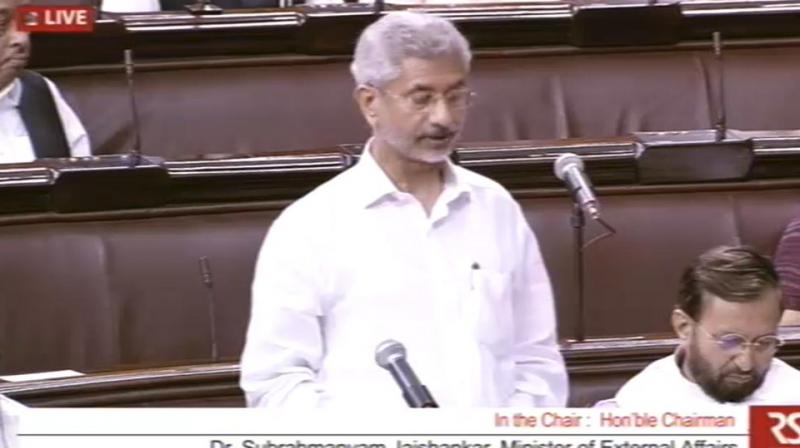 New Delhi: Describing the detention of Indian national Kulbhushan Jadhav in Pakistan as "illegal" and under "fabricated" charges, External Affairs Minister S Jaishankar on Thursday urged Islamabad to release and repatriate him immediately.

Jaishankar said, "We once again call upon Pakistan to release and repatriate Kulbhushan Jadhav."

Making a statement in Rajya Sabha, he said the verdict of the International Court of Justice is not only a vindication for Jadhav but also for all those who believe in the rule of law.

In a major victory for India, the International Court of Justice on Wednesday ruled that Pakistan must review the death sentence for Jadhav, who has been sentenced to death by a Pakistani military court on charges of "espionage and terrorism".

Jadhav, 49, a retired Indian Navy officer, was sentenced to death by the Pakistani military court on charges of "espionage and terrorism" after a closed trial in April 2017.

A bench led by President of the Court Judge Abdulqawi Ahmed Yusuf ordered an "effective review and reconsideration of the conviction and sentence of Mr Kulbhushan Sudhir Jadhav".

The bench also ruled by 15 votes to 1 that Pakistan had violated India's rights to consular visits after Jadhav's arrest.

Pakistan "deprived the Republic of India of the right to communicate with and have access to Mr Kulbhushan Sudhir Jadhav, to visit him in detention and to arrange for his legal representation", the judges had said. Pakistan was under the obligation to inform India about the arrest and detention of Jadhav under the Vienna Convention, Judge Yusuf had ruled.