A video posted by IFS Parveen Kaswan shared a video of a baby rhino being rescued by a team of wildlife rescuers. 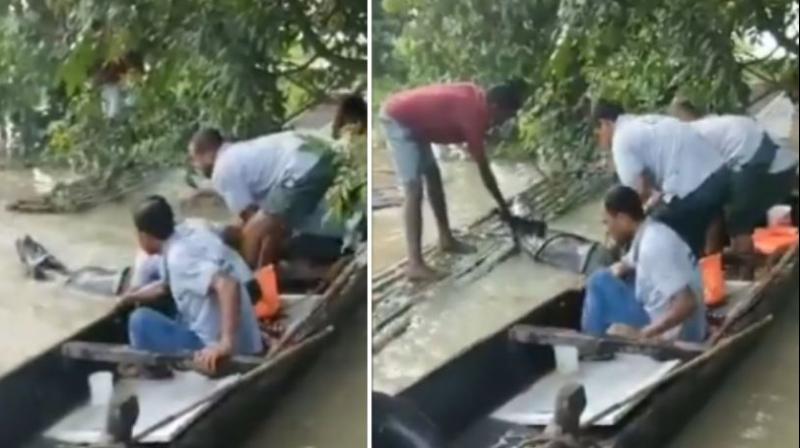 The 45-second long video showed the rescuers struggling to lift the calf out of the water. (Photo: Screengrab)

Assam: As floods in Assam intensified, Kaziranga National Park went nearly underwater, with reports stating that about 90 percent of the park was submerged. In past few days, images and videos of animals trapped in floods and trying to escape have made it to the internet.

A video posted by IFS Parveen Kaswan shared a video of a baby rhino being rescued by a team of wildlife rescuers.

The 45-second long video showed the rescuers struggling to lift the calf out of the water. "Some will be lucky. A team of wildlife rescuers get hold of a #Rhino calf in Kaziranga. In the time of disasters", Kaswan wrote in the tweet.

This will melt your heart.

90% of #Kaziranga is under water now. #Disaster happens for #wildlife also. It increases when habitat is reduced and criss-crossed by other infrastructure. In the time of such disaster it becomes difficult for them to reach at a safer location. pic.twitter.com/E1yowPPJ1b

The video has garnered gratitude and respect for the rescuers who appeared to be Kaziranga staff.

Field staff of Kaziranga are one of the sincerest and I am proud of working with him.#AssamFloods #Kaziranga #Floods #Rhino #Rescue #AssamForest #Conservation #GuardiansOfNature #Wildlife #KazirangaNationalPark pic.twitter.com/mjd5mrUilZ

Happy to see the Rhino Calf rescued by this team of brave Wildlife rescuers. Sad to see his struggle in the gushing waters
Floods, natural Disasters take a heavy toll on precious wildlife, which is often not accurately accounted for
God bless this Calf with a long, safe life.

thats beautiful video! So Rhino baby bray like a goat 🐐

Hope the mom is found soon and reunited.

Kaziranga is home to the world's largest population of Indian one-horned rhinoceroses. Other animals such as tigers, elephants, sloth bears, monkeys and musk deer are also found in the forest.