India   All India  18 Jul 2019  Tiger strays into house to relax, after floods in Assam’s Kaziranga National Park
India, All India

Tiger strays into house to relax, after floods in Assam’s Kaziranga National Park

Forest officials along with the Wildlife Trust of India together are attempting to tranquilize the tiger and take it to safety. 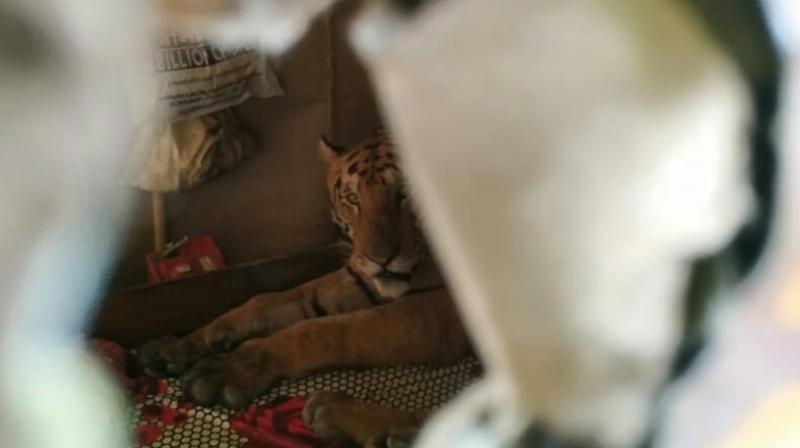 New Delhi: A photo has emerged on Twitter of a Royal Bengal tiger lying on the bed in Assam’s Kaziranga, where floods have left many animals dead or displaced from the world renowned park.

The tiger had apparently strayed out of the flooded national park and somehow ended up in a house near the national highway. In the image tweeted by the Wildlife Trust India, the tiger is lying down on what appears to be a bed, peering from a hole ripped into the wall.

#JustIn our vet @samshulwildvet is making plans with #AssamForestDepartment @kaziranga_ to tranquilise a #tiger that has entered a house and is relaxing on a bed! #AssamFloods bring in unusual guests! #Kaziranga Zoom in to see #OMG wish them luck! @action4ifaw @deespeak pic.twitter.com/SX2FoYOB6K

Forest officials along with the Wildlife Trust of India together are attempting to tranquilize the tiger and take it to safety.

Assam has been badly hit by floods that have displaced thousands of people and cut off large parts of the state.

Forest officials say 95 per cent of the Kaziranga National Park -- home to several endangered species  including the one horned rhino, has flooded. Thirty wild animals have died this week. Animals could be seen emerging out of the park to escape drowning.

After days, flood waters have now begun receding from the wildlife reserve.

The national park is bound to the north by the river Brahmaputra and highland areas in its south. Two years ago, over 360 animals including 31 rhinos and a tiger drowned in floods.