The laws being amended include the Customs Act, Customs Tariff Act, GST Act and Finance Act of 2002 and 2018. 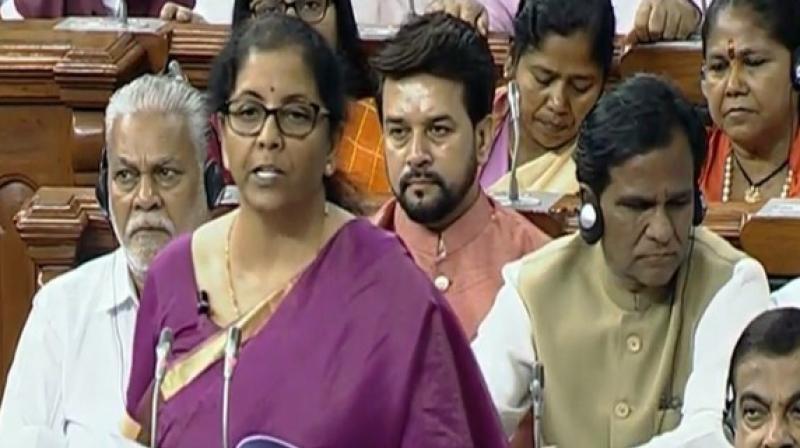 The minister said GST alone has five amendments to bring about ease of compliance by the MSME sector and promote digital payments. (Photo: ANI)

New Delhi: Finance Minister Nirmala Sitharaman on Thursday said seven legislations each under the direct taxation and indirect taxation were being amended by the Finance Bill to boost manufacturing and bring greater simplicity and effectiveness to the laws.

Moving the Finance (No.2) Bill, 2019 for passage in the House, she said amendments were happening under five categories - direct taxes, indirect taxes, Prevention of Money Laundering Act, financial markets and central roads funds.

The minister said under direct taxation, seven Acts were being amended with a view to giving a boost to manufacturing and `Make in India' initiative.

These Acts, she said, include Payments and Settlements Systems Act, Black Money Act, Income Tax Act and Finance Act of 2015 which relates to income disclosure scheme.

The laws being amended include the Customs Act, Customs Tariff Act, GST Act and Finance Act of 2002 and 2018.

The minister said GST alone has five amendments to bring about ease of compliance by the MSME sector and promote digital payments.

Earlier, RSP member N.K. Premachandran had raised objections to the provisions in the finance bill that entail amendments in the existing laws saying it is "backdoor legislation" and "bypasses legislative scrutiny".

He urged the Speaker Om Birla to give a ruling "to protect the rights of MPs".

Sitharaman said the rules do not rule out the possibility of including non-taxation related matters in the bill. "What we are doing now is absolutely imperative," she said.

The Speaker then allowed the House to take up discussion on the finance bill, saying non-taxation related proposals were also there in bills passed in 2017 and 2018 and there is no specific ban.