Thee spread of Japanese Encephalitis during the flood has made the condition more challenging as death toll due to JE has also climbed to 82. 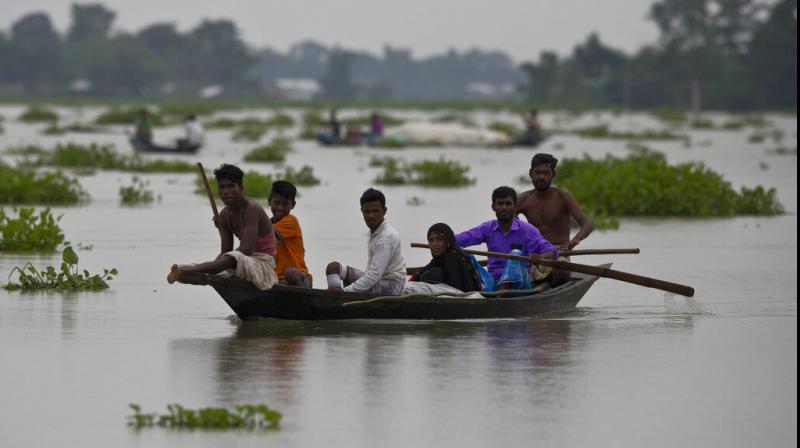 Though the Central government has released an amount of Rs 251.55 crore of grants-in-aid to Assam towards Central share of state disaster relief fund for the current year, people affected by flood complained about the non-disbursal of relief materials in adequate quantity at various places.

Union jal shakti minister Gajendra Singh Shekhawat, who visited the flood-hit areas of the state, said that the government is finding long-term and permanent solution to tackle flood, for which a hydrographic survey would be done in the rivers of the state.

“Finding a permanent solution is the need of the hour. After identifying a suitable location, a pilot project would be done to explore the feasibility of the hydrographic survey,” the Union minister said.

He added that the problem of flood in Assam is only aggravating since 1951, and along with the state, the issue of siltation is being felt everywhere in the country.

“The Himalayan region is the worst affected though. The region is at the receiving end of a problem which is generated somewhere else. To mitigate damage to life and property, we can also look to adopt soft measures to combat flood like increasing afforestation in the Himalayan region and prohibiting rock cutting and unauthorised mining,” he said.

Meanwhile, the spread of Japanese Encephalitis (JE) during the flood has made the condition more challenging as death toll due to JE has also climbed to 82 whereas, 134 positive cases have also been detected.

The India meteorology department (IMD) has stated that the current meteorological analysis and numerical model guidance suggest a reduction in the widespread rainfall activities across the Northeastern states.

In view of the devastating flood situation the monsoon session of the Assam Legislative Assembly has also been postponed. The session, which was scheduled to start from July 18, has now been extended for start from July 26.

A total of 311 relief distribution centres have been set up in the districts of Dhemaji, Lakhimpur, Nalbari, Barpeta, Kokrajhar, Kamrup, Morigaon, Nagaon, Hojai, Golaghat, Majuli, Sivasagar, Dibrugarh and Tinsukia. The Brahmaputra was flowing above its danger levels all over the state.