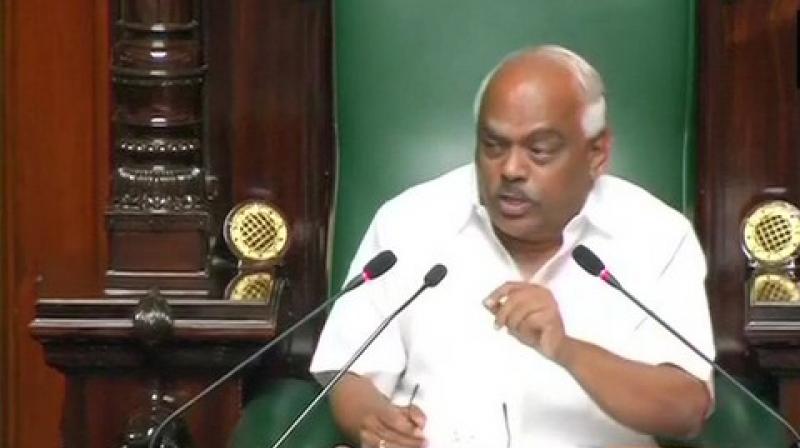 'This House holds Supreme Court in the highest esteem. Let me make it clear to the leader of Congress Legislature Party that this Office is not restraining you from exercising any of your authority. I've no role to play in that,' he said. (Photo: ANI)

New Delhi: Karnataka Assembly Speaker K R Ramesh on Thursday said the leader of Congress Legislature Party can exercise his authority on issues like whip against absentee members without any interference from his office.

"This House holds Supreme Court in the highest esteem. Let me make it clear to the leader of Congress Legislature Party that this Office is not restraining you from exercising any of your authority. I've no role to play in that", he said during the debate on the confidence motion moved by Chief Minister H D Kumaraswamy earlier in the day.

His statement holds significance in the wake of demand by Congress leaders in the House that a decision be taken first on the rebel Congress and JD-(S) MLAs who have skipped the House in defiance of party whips to them to attend the proceedings on Thursday in which a trust motion has been by moved by Chief Minister H D Kumaraswamy heading the coalition government.

They also contended that the Supreme Court had in its order on Wednesday spoken against the rebel MLAs being compelled to attend the proceedings when nobody had raised the issue their prayers before the court.

"If you intend to implead yourself as one of the respondents before the Supreme Court for amending this you are at liberty to do so. When a member chooses not to come, our attendants will not permit them to sign the register of attendance. The concerned member will not be entitled to draw any emolument that is meant for the member to be drawn for being present in the House," Kumar said.

"Point of order can be raised not only when my right is violated. But, we can also raise it when the right of the house is violated. If people don't abide by the Whip, then there won't be any value to it. There will be a day when MLAs will not respect the Whip issued by either of parties", Patil said.

Minister Krishna Byre Gowda, on the other hand, spoke about deciding the fate of the members of the house before deciding on the vote of confidence.

Earlier while making an opening statement, Kumaraswamy launched a veiled attack on BJP and said, "I have self-respect and so do my ministers. How can I live with this and not discuss this? I have to make clarifications. Who is responsible for destabilising this government? The Vidhan Soudha is in the pages of Parliamentary history for its conduct. It is not important if the coalition survives, but we must discuss this conspiracy to weaken democracy."

Meanwhile, as per the register of attendance, 18 MLAs were not present in the Assembly as the House took up the vote of confidence for debate.

Kumaraswamy had on Wednesday issued a whip to all 37 MLAs of JD(S) including three rebel legislators Narayana Gowda, Gopalaiah and H Vishwanath to be present in the Assembly at the time of trust vote.

Similarly, the Congress had issued a whip to its members including the rebels to attend the House.

Kumaraswamy had warned that if MLAs do not attend the House and vote against the party whip even after attending the session on the day of trust voting, action will be initiated under the rule of Anti-Defection Law and that MLA will be disqualified from his post.

The Supreme Court on Wednesday had observed that 15 rebel MLAs cannot be forced to take part in the proceedings of the House.