Women can pray in Sabarimala, ‘she has same right as a man’: SC

On what basis do you deny her entry? It is against Constitution, SC asks temple authorities. 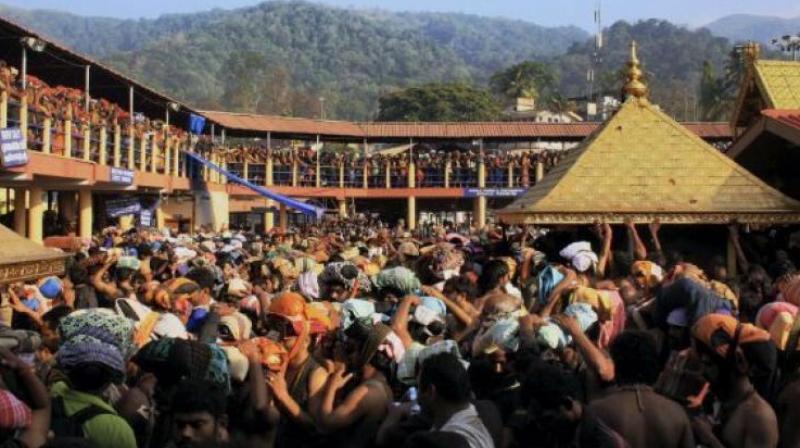 Mumbai: “Once you open a temple, everyone can go,” said the Supreme Court on Wednesday while hearing the matter of an arbitrary, temple-enforced ban on women between 10 and 50 years from entering the Sabarimala in Kerala.

A five-judge bench of the Chief Justice Dipak Misra and Justices Rohinton Nariman, A M Khanwilkar, D Y Chandrachud and Indu Malhotra are hearing petitions filed by Indian Young Lawyers Association and others challenging the ban in vogue for several years.

Counsel Ravi Prakash Gupta submitted that women devotees between the age group of 10 to 50 were being denied entry into the temple and their touching the feet of Lord Ayyappa had been considered as a desecration of the Hindu deity. ‘Menstruation’ was the reason sited for such prohibition by the temple trust.

Justice D Y Chandrachud said: “One’s right to pray being a woman, is equal to that of a man and it is not dependent on a law to enable one to do that."

Chief Justice of India Dipak Mishra asked temple authorities: “On what basis do you deny (women) entry? It is against the Constitutional mandate. Once you open it for public, anybody can go."

The Kerala government’s stand was that women should be allowed to offer prayers in Sabarimala temple. Minister K Surendran said: “We've filed an affidavit in SC explaining our stand. We're bound to obey its verdict.”