India   All India  18 Jul 2018  Allies seek debate on lynchings, dalits as PM reaches out to Oppn
India, All India

Allies seek debate on lynchings, dalits as PM reaches out to Oppn

Former NDA ally TDP is likely to push for a no-confidence motion against the government for denying Andhra Pradesh special category status. 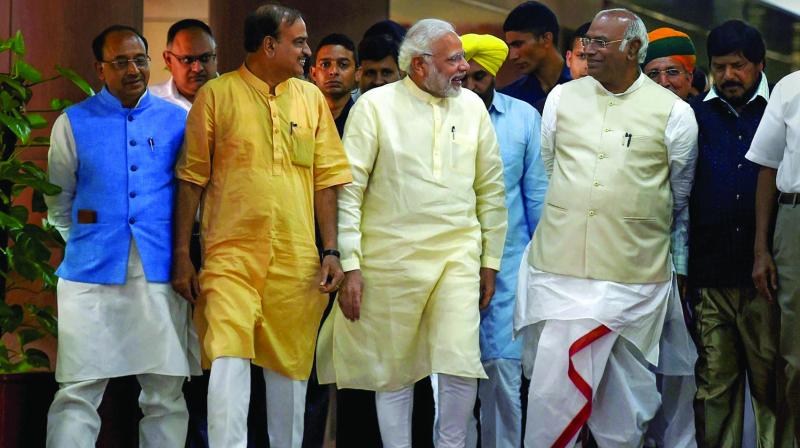 New Delhi: Amid indications that the Monsoon Session of Parliament is going to be a stormy affair, Prime Minister Narendra Modi on Tuesday sought the cooperation of all political parties in making it a productive sitting and raise issues in both Houses as people expected them to do so.

Interestingly, the BJP’s ally Shiv Sena asked the government that Parliament should take up the issue of mob-lynching as soon as possible, calling it a “gambhir samasya (serious problem)” and another ally LJP sought a bill to restore the original provisions of a law on atrocities against dalits and also to discuss several issues related to the community.

The Opposition parties had been criticising the Modi government and the BJP for spurt in the mob-lynching case, often involving cow vigilantes, and would also be seeking a discussion on it along with government’s alleged failures on economic front, political crisis in Kashmir and price rise. However, the Sena said that the recent cases involved mob-lynching fuelled by the social media or fake news and not just cow vigilantes.

With crucial Assembly polls just months away, the government on its part will try to push politically significant legislations like triple talaq bill that criminalises instant divorce pronounced by Muslim men and also the OBC bill that seeks constitutional status for a commission meant for backward classes, while the ruling BJP would try to corner the Congress on its president Rahul Gandhi’s alleged Muslim appeasement remarks.

At the all-party meeting, the Opposition parties raised a number of issues, including scrapping reservation for SC/ST category in appointments in higher education and bringing in law for stopping lynchings as per the directive of the Supreme Court.

AAP’s Sanjay Singh raised the issue of alleged discrimination by the Centre against the Delhi government and hoped that the Prime Minister would address the issue.

Also, former NDA ally TDP is likely to push for a no-confidence motion against the government for denying Andhra Pradesh special category status. Other than these issues, the issue of next deputy Chairman of Rajya Sabha could also witness a confrontation between the Opposition and the government as both sides are busy wooing non-NDA and non-UPA parties to get the required numbers to get their respective nominees, whose names have not been yet officially announced.

After the all party meeting, SP’s Ram Gopal Yadav said that his party will not allow the House to function till an assurance is given by the government on the floor of the House on reservation to SCs and STs in higher education.

Later, at the NDA meeting, the Shiv Sena sought discussion on mob-lynching, including the Dhule incident in Maharashtra where five people were lynched over allegations of child lifting. Sena also demanded that Kashmir issue and the ongoing strike by the Maharashtra dairy farmers. Sena raised these issues at the NDA meeting, which was also attended by BJP president Amit Shah, senior Cabinet ministers Rajnath Singh, Sushma Swaraj, veteran leader L K Advani and other NDA parties leaders.

Parliamentary Affairs ministrer Ananth Kumar said that the Prime Minister agreed with the suggestion that NDA parties should be meeting more often formally or informally. The NDA leaders also passed a resolution praising the Prime Minister for the government’s decision to hike the support price given to farmers for their produce.

Rajya Sabha chairman M Venkaiah Naidu also met leaders of various parties in the evening and urged both the ruling and opposition parties to stop the “mutual blamegame” of holding each other responsible for persistent disruptions and dysfunctional House.