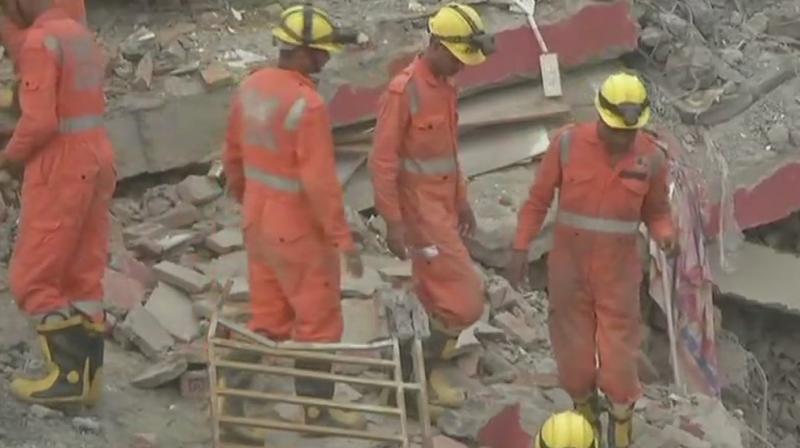 Heavy machinery has been deployed to remove the debris and search for the trapped bodies and look for survivors, several reports said. (Photo: Twitter/ANI)

New Delhi: At least three bodies have been retrieved after two buildings collapsed in Greater Noida near Delhi on Tuesday night, the National Disaster Response Force said. Many are feared trapped under the debris.

“Four NDRF teams and dog squad are present on the spot, chances of any victim being alive are scant. Operations will continue until all victims are rescued," NDRF Commandant P K Srivastava told news agency ANI.

The reason behind the collapse is still not known.

“As of now we don't know what happened, it is too early to say anything in that regard. Our motive right now is to save any life that is left. Rescue operations by NDRF are underway,” Kumar Vineet, Additional District Magistrate of Gautam Budh said.

However, three people have been arrested in connection with the matter, ANI reported.

Earlier, Chief Fire Officer Arun Kumar Singh was quoted by news agency PTI as saying that at least 12 labourers were inside the building at the time of the incident and all of them are suspected to be trapped.

Uttar Pradesh Chief Minister Yogi Adityanath took a stock of the situation and asked the District Magistrate to take up relief measures with NDRF teams and police to ensure immediate rescue.

Union Minister Mahesh Sharma also visited the accident site late night and said a  probe has been ordered into the matter. “Our priority right now is to save any life that is left. 12 ambulances are present here and all the hospitals nearby have been alerted. NDRF teams and dog squads are also present on the spot,” he added.

Heavy machinery has been deployed to remove the debris and search for the trapped bodies and look for survivors, several reports said.

According to a report in The Indian Express, local sources reportedly alleged that the collapsed building was unauthorised. The building was constructed two years ago.

“Locals have told us that the building that collapsed was constructed 2 years ago and many flats in it were not occupied. An investigation will be carried out in this matter,” B N Singh, District Magistrate of Gautam Budh Nagar, said.