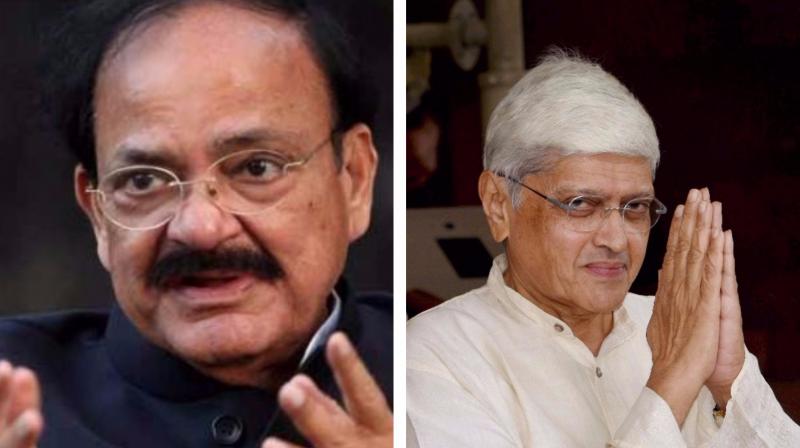 Reaching out to parties across political divide Naidu said he no longer belonged to the BJP and would strengthen democratic institutions if elected. Naidu, who was flanked by Prime Minister Narendra Modi and party veteran LK Advani when he filed his nomination in the parliament complex, said the candidature was an "honour" for him and he would uphold the dignity of the office if elected.

In a "farewell" press conference soon after he filed his nomination, he expressed his gratitude to the prime minister and BJP chief Amit Shah as he played down reports that he was not very keen for the new responsibility.

"I am fully aware of the august responsibilities associated with the office. I would like to assure the people of the country that, on being elected, I will uphold the traditions and standards set by the worthy predecessors. I will uphold the dignity of the office of the vice president," he said.

India's beauty and strength lie in its parliamentary democratic system, Naidu said, adding that it would be his endeavour to strengthen this further.

"In our country, we are living in times of division. A whole force which is dividing our country is in action mode and that spells danger," Gandhi said after filing his papers.

He said he was representing the common citizen of the country and not any political party and would try and help bridge the gulf between the public and politics.

"People's faith in politics itself has diminished and has collapsed. I would like to see a revival of that faith," he said.

Naidu added he would continue as a member of the Rajya Sabha and cast his vote in the vice presidential poll next month.

His win is all but certain due to the NDA's numerical superiority over opposition parties, which have fielded Gopalkrishna Gandhi as their nominee.

The former West Bengal governor, Gopalkrishna Gandhi, grandson of Mahatma Gandhi and C Rajagopalachari, has been picked by 18 Opposition parties to be their nominee for the post of vice president.