As many as three thousand food packets were air-dropped by the afternoon. 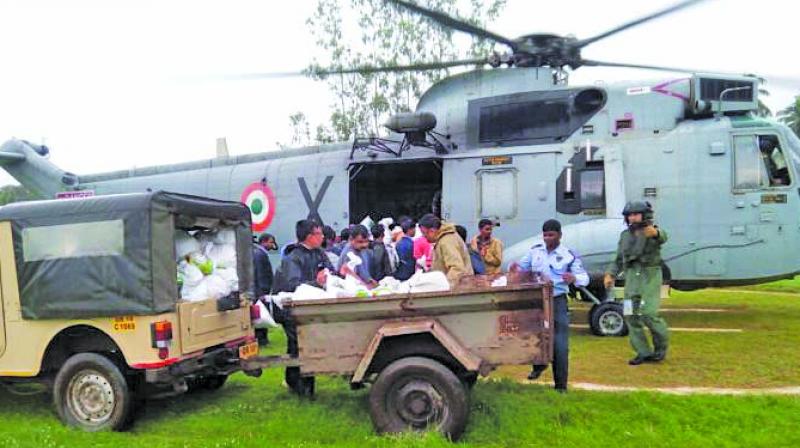 Food packets being loaded into a copter. (Photo: Asian Age)

Bhubaneswar: The Odisha government on Monday began air-dropping of food materials in the flood-hit Rayagada district.

According to state Special relief commissioner Bishnupada Sethi, one copter of the Indian Air Force (IAF) was deployed in the air-dropping of food packets in villages under Kalyansinghpur block of the district.

As many as three thousand food packets were air-dropped by the afternoon. The copter arrived in Rayagada from Visakhapatnam in the morning but couldn’t take-off for around two hours due to bad weather. It later flew with relief for the marooned people as weather improved.

On Sunday, the state government had urged the Centre. On the other hand, the Rayagada district administration has started serving cooked foods to those taking shelter in schools.

“Flood situation in Rayagada is improving. Water in major rivers in the district is receding. Free kitchens have been opened for affected people,” the chief minister told reporters here.

“I am closely monitoring the flood situation in Rayagada and Kalahandi districts. Every effort is being made to reach out to the people in affected areas. Sufficient food, medicine and other supplies are being made available to the people. Defence chopper is carrying out sorties in full swing for locating distress zones, rescuing affected people and air dropping supplies in affected areas,” Mr Patnaik said.

It may be mentioned here that heavy rainfall since Saturday has triggered flash floods in of Rayagada and Kalahandi districts of Odisha.

Due to incessant rainfall, the water level of Nagabali and Kalyani rivers rose as a result of which nearly 400 villages in Kalyansinghpur block in Rayagada and several places in Kalahandi were marooned.