Brahmaputra at Nimatighat in Jorhat, Barak at AP Ghat in Cachar and Badarpurghat in Karimganj are flowing above the danger mark. 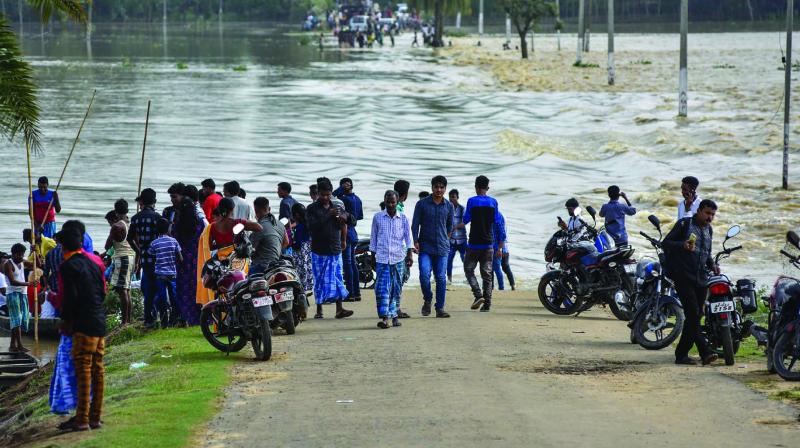 Villagers stand near a partially-submerged road in flood-affected Hojai district of Assam on Saturday. (Photo:PTI)

Guwahati/Imphal/Agartala: The devastating flood in the Northeast has claimed six more lives during the past 24 hours, taking the death toll to 23, although the situation in the region showed a marked improvement on Sunday, barring Assam, officials said.

While five more people died in Assam since Saturday, one person lost his life in Manipur.

In Assam, 4.5 lakh people have been affected in the deluge across six districts. According to the Assam State Disaster Management Authority (ASDMA), all the five persons lost their lives in three districts, taking the death toll in the state to 12 in the first wave of flood this year.

The ASDMA said over 4.48 lakh people have been affected in Hojai, Karbi Anglong West, Golaghat, Karimganj, Hailakandi and Cachar districts.

According to the report issued on Sunday, Karimganj has been the worst-hit with nearly 2.15 lakh people affected followed by Hailakandi where over 1.93 lakh people have been suffering in the deluge.

As of now, Brahmaputra at Nimatighat in Jorhat, while Barak at AP Ghat in Cachar and Badarpurghat in Karimganj are flowing above the danger mark.

Other rivers like Dhansiri at Numaligarh in Golaghat, Jia Bharali at NT Road crossing in Sonitpur, Kopili at Kampur in Nagaon, Katakhal at Matizuri in Hailakandi and Kushiyara at Karimganj town are also flowing above the danger mark.

In Manipur, water level of major rivers flowing in the five districts of the Imphal Valley has receded considerably with only Lilong River flowing a little above the "warning level".

Flood control officials said the situation has improved a lot and water level of the previously inundated localities has gone down. 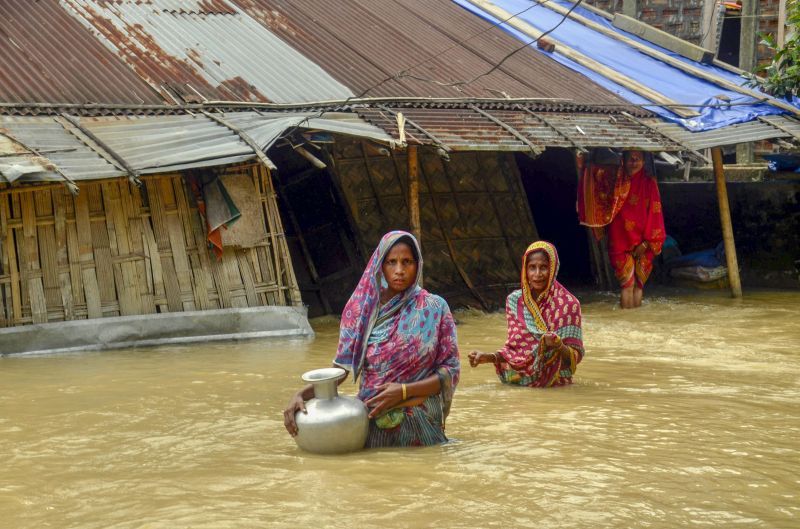 Villagers carry clean water as they wade across flood-affected areas at Nilambazar village, in Karimganj on Sunday. (Photo: PTI)

The Imphal river, however, is reported to be a "highest flood level" at the Minuthong area by a few margins, although in general it is below the danger mark.

The Iril and Nambul rivers too have gone low below the highest flood level and there is no immediate danger with the intensity of rainfall going down.

According to the latest report available from the State Relief and Disaster Management, one person drowned in the past 24 hours, taking the death toll in the state to 8.

The number of livestock killed has been estimated at 400, while the area of paddy fields affected is at 3,947 hectares so far.

Chief Minister N Biren Singh, during a visit to flood-affected area of Maiba Khul and Mongjom area in Imphal East district, told reporters that he had a telephonic conversation with Union Home Minister Rajnath Singh and briefed him about the flood situation in the state.

He added that he had sought immediate flood assistance to rebuild houses, repair and construct roads damaged by the massive flood which had hit the state since last week.

The overall flood situation in Tripura too improved significantly on Sunday with water receding in all the major rivers of the state.

Altogether, 32,000 people affected by the flood are still housed in 173 relief camps -- mostly in worst-hit Unakoti district, according to the State Emergency Operation Centre (SEOC).

The river Manu, which had caused extensive damage in the Kailashar and Kumarghat sub-divisions in Unakoti district, is now flowing two-metres below the danger level as there was no fresh downpour over the past 48 hours.

The Manu river's danger mark is at 24 metres, while the water level stood at 22.22 metres.

When contacted, District Magistrate (DM) Unakoti district D Darlong confirmed that the overall flood situation has been better in the district but relief work was still underway.

Three persons have died and seven others were injured in flood-related incidents since June 5, while 24 huts were completely destroyed, besides leaving several acres of crops damaged, according to the latest report of the SEOC.

Post-flood operations like distribution of relief materials, medical camps and assessment of damage have already begun across the state, an official of the SEOC said.