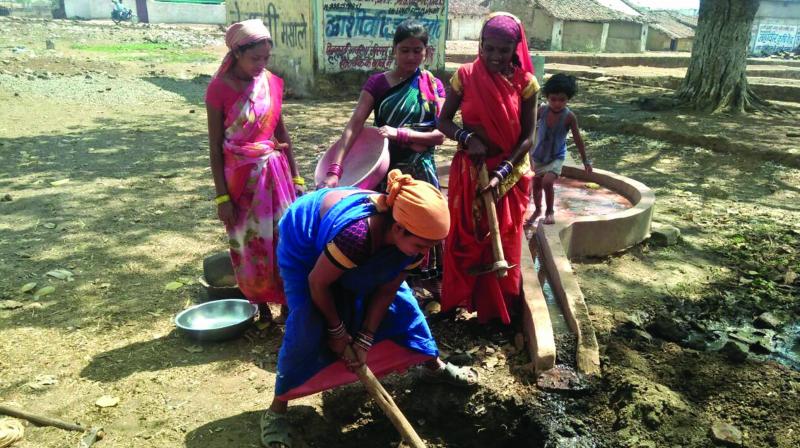 Women building a water bank near a hand pump in a Chhattisgarh village.

Rajnandgaon (Chhattisgarh): A mundane job can, too, transform into a mission. A group of women in a sleepy village in Chhattisgarh’s Rajnandgaon district have demonstrated this.

The water conservation initiative started in 2002 by Phoolbasan’s team has caught the imagination of women in other villages spurring them to wield shovel and pickaxes to build water banks in their respective areas.

“Around 20,000 water banks have so far been created in nearly 900 villages in Rajnandgaon district in the past 16 years with initiatives solely by local women. Water conservation has now turned into mass movement in the region,” said 45-year-old social activist Phoolbasan, who has even impressed Prime Minister Narendra Modi for playing a key role in making two blocks in Rajnandgaon district open defecation free (ODF) in 2016.

It all began when the hand pumps in Sakul Daihan  village went dry in 2002 summer.

Phoolbasan along with some women had then taken a vow to end water woes in their village and approached conservationists for tips, particularly during summer.

“We have been advised to go for water conservation to recharge water sources in the village. We have been given demos on how to conserve water going waste at hand pumps to recharge them,” she recounted.

The very next day, the women folk in the village armed with shovels and pickaxes created water banks near all the four hand pumps in the village by digging a three-ft deep pit and packing it with layers of stones, bricks, coal and then sand to ensure that the waste water from the hand pumps flowed into the ground after being filtered and treated through these layers, she said. While sand layer on the surface filters water from dirt, the layer of coal acts as germicide by treating the water. The treated water then flows into the ground through the layers of bricks and stone.

“Our efforts have yielded results. The ground water table in the area where bore wells or hand pumps have been set up has started rising. This was evident from the fact that none of the hand pumps in the village has gone dry in summers since then,” said Sandhya Dewangan, a  village resident.

The story of all-weather functioning of hand pumps of Sakul Daihan has spread across the region, prompting women in other villages to come forward to emulate Phoolbasan’s model of ending water problem in their areas.

“Water banks have been created in more than half of rural Rajnandgaon now,” Shiv Dewangan of Chikla Kesa village in the district, told this newspaper.

Rajnandgaon district has 1,640 villages. Nearly 60,000 women in around 900 villages in the district have involved themselves in building water banks in their areas.