India   All India  18 Jun 2017  Mamata called us terrorists, not ready for talks with WB govt: GJM
India, All India

Mamata called us terrorists, not ready for talks with WB govt: GJM 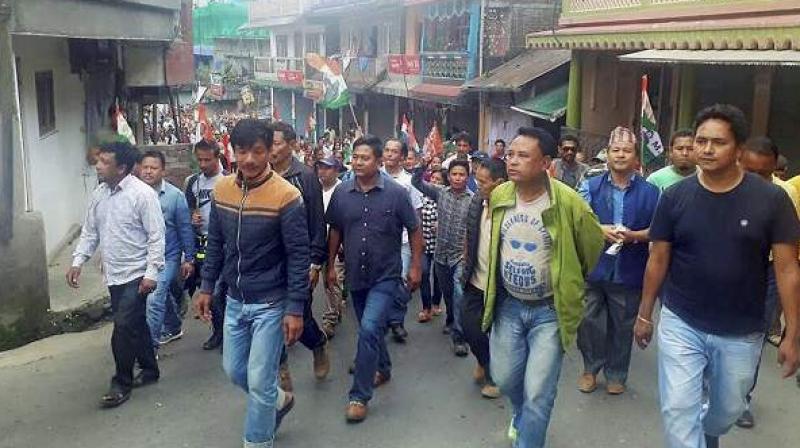 Members of Gorkha Janmukti Morcha on June 16 during the indefinite strike. (Photo: PTI)

Darjeeling (WB): The GJM on Saturday ruled out any discussion with West Bengal government but said it is "comfortable" in holding talks with the BJP-led government at the Centre.

The BJP is an ally of the Gorkha Janamukti Morcha (GJM) and party MP S S Ahluwalia had won the 2014 Lok Sabha elections from Darjeeling with its help.

"We are not ready for talks with West Bengal government. Mamata Banerjee has insulted us, she has called us terrorists," GJM leader Binay Tamang said.

"We are fighting for our right and freedom. We will talk only with the central government. We are not interested in talks with Mamata Banerjee and her TMC government," he said.

Tamang's comment comes in the backdrop Banerjee's claim of "deep-rooted conspiracy" in Darjeeling Hills supported by insurgent groups of the NE for helping the GJM in its demand for a separate Gorkhaland.

Banerjee said she is ready for talks but not under the current situation.

GJM supremo Bimal Gurung has accused the state police of letting lose atrocities on the people of the hills and said the time has come for an all out fight for Gorkhaland.