Is PM Modi listening to the anguish of farmers?

The ability to represent failure as success has in fact been the order of the day for this government. 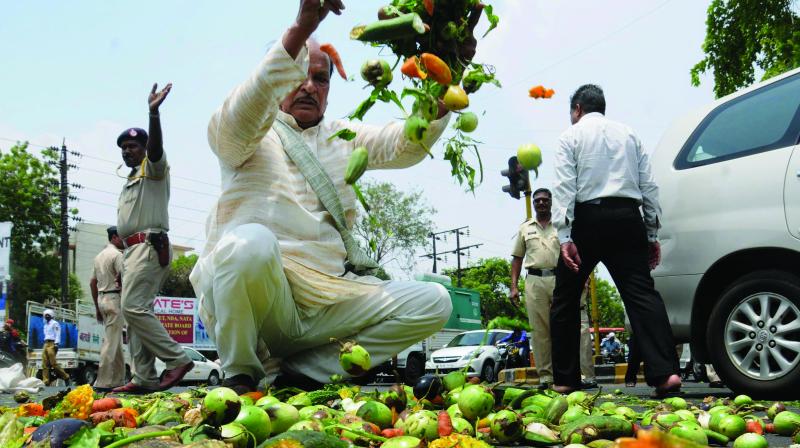 Farmers throw vegetables on a road during a protest as part of the Maharashtra bandh over various demands in Nagpur, Maharashtra. (Photo: PTI )

In order to grab headlines, Prime Minister Narendra Modi has developed a habit of dishing out disrespect to the Congress Party and the earlier governments. But in the process — over the last three years — he has also heaped insults at poor people, specially agrarian sections and also the minorities. He questioned the people’s wisdom and has tried to present himself as the saviour of our times.

The ability to represent failure as success has in fact been the order of the day for this government. It is perhaps payback time now as farmers have launched a long-term agitation. The chaos the Modi government has created in the agricultural fields and streets of Madhya Pradesh and several other agrarian states will soon return to haunt him and the BJP.

The stir that started off from Madhya Pradesh — where the BJP has been in power since December 2003 — and is assuming alarming proportions and many believe this is the first major non-sectarian mass movement confronting the Narendra Modi government. The Hardik Patel-inspired agitation in Gujarat and the Jat reservation violence in Haryana were different in more ways than one.

Now look at the few stark differences one can see as an observer to a farmers’ agitation than the rest of the anti-Modi protests we have seen in the last three years. Even the agitations in universities were “conquered” by pro-Hindutva elements by raising the bogey of patriotism – however faulty it was.

The genuine protests were curbed down by raising the bogey of militant Hindutva-driven patriotism — which is far off from the Hindu way of looking at things.

In this context, we know quite well that the farmers don’t have any socio-political identity other than that they produce food and save crores of Indians from starvation. They do not need some adjectives to carry them as baggage. On the caste politics front, we should understand that farmers belong to all castes and creeds, and also vice versa.

In terms of the results of their hard work, the farmers provide food to all. Hence any kind of attempt to play “us and them” syndrome may not work with agitating farmers even as the government is trying to bring in some other issues to discuss in the political discourse.

No amount of neo-nationalism and anti-secular credentials would identify or can challenge the very intent of the farmers. Farmers are not members of a religious minority either – one that can plant a “Pakistan angle” into the TV debate about their stir. Thus, we can see the challenge for the Modi government is fairly potent one.

It is also necessary to see how the NDA government’s anti-farmer policies have only harmed agrarian society. Essentially, under the Modi Sarkar, there has been no planning in dealing with farm issues. The Prime Minister and his agriculture minister Radha Mohan Singh (also a man with a RSS background) had pushed for Soil Health Cards and other gimmicks like Fasal Bima Yojana — only to hoodwink farmers. Thus, in the given circumstances, we find there is an opening for the Opposition parties to capitalise on over the government’s anti-farmer policies.

It is therefore an issue that needs to be pushed hard and probably can expose the neo-capitalist approach of the Modi government – once rightly described by Rahul Gandhi as the “suit-boot ka sarkar”.

But what is important here is also to underline that the warning bells emanating from Indian agriculture have been successively ignored in the past. It goes without saying that public spending in the agriculture sector dwindled over the years from a healthy one-third to half of GDP to a mere 14.7 per cent. It is sad yet again that despite all plans drawn up for minor irrigation projects, the agricultural season is often marred by dearth of water while every year people lose their livelihood and also lives in the recurrent annual floods.

Even in the past, though the UPA government has consistently increased the minimum support price (MSP), it was a common knowledge that the rate of such increase often could not meet the rate of increase in the cost of production as calculated by the National Commission for Agricultural Costs and Prices (CACP). This MSP front, therefore, needs a total revamp at the earliest.

In a typical case, we can presume that the MSP is higher than the market price, and farmers would gain every time the government announces the value of MSP. However, farmers are seldom able to sell their produce at MSP rates. Every village does not have NAFED or FCI outlets. The FCI procures a major portion of rice and wheat only from a few select states. An estimated 70 per cent of rice procurement comes from the states of Punjab, Andhra Pradesh, Chhattisgarh and Uttar Pradesh, while 80 per cent of wheat procurement comes from Punjab, Haryana and Madhya Pradesh.

The Prime Minister may not know that FCI has a minimum presence in other major rice and wheat producing states like Bihar, West Bengal, Assam and Odisha. States like Telangana and also the erstwhile Andhra Pradesh have been suffering as well. Butunfortunately, the government seems least bothered about this.

Worse, the government has only made things further complicated for the rural population. Just to play politics vis-à-vis the Congress Party, the Modi government ignored a good rural job scheme like MGNREGA. The latest surveys by independent bodies showed that the work generated in 2014-15 and 2015-16 was much less than the previous two years. But the budgetary allocation for the scheme was drastically reduced in the Modi government’s first full Budget for the year 2015-16. Notably, such was the government approach when even the World Bank country director in India said MGNREGA, “is the only insurance (scheme) India has”.

Prime Minister Narendra Modi represents a political cult that thrives with fascist approach. There is also an unwillingness to learn. This reluctance to learn from mistakes is a permanent feature of this government. Demonetisation hit the farmers hard, but this government would not say sorry.

Indian agriculturists need help and support. But there are many issues which drive farmers into committing suicide. Studies reveal that besides financial woes, which push many farmers to commit suicide specially during economic crises or periods of extreme weather, a recent study has shown that occupational factors like poor access to quality healthcare and isolation continue to place farmers at a disproportionately high risk of suicide. The study report by Corinne Peek-Asa, Professor at University of Iowa College of Public Health in the United States, and published in the Journal of Rural Health, should send some warning signals provided that this government is ready to listen.

As nothing seems to force some soul-searching at the level of Prime Minister Modi and his associates in farm policy management, we should be prepared for a lazy approach in the Niti Aayog. The analyses on farmers’ woes in the Krishi Bhavan are these often fuzzy and there is a total indifference and failure to even comprehend the reports coming from various quarters.

Some data show that during the period between 1991-1992 and now (2014-15), the coefficient of variation for agricultural output is 191.34, in comparison to 50.48 for industry. This was about 22 for the service sector. This has led to unequal income distribution in India, with the rural-urban wage gap showing a northbound graph. Compared to India’s 45 rural-urban gap, it is only about 10 per cent even in Indonesia.

The World Bank says India is home to the largest number of poor people in the world. Some 850 million people still live in rural India. A majority (65 per cent) of farming is rain-dependent and thus the likelihood of a farmer committing suicide is more during and after the dry spell. Where do these lead to?

Is Narendra Modi, the Prime Minister of world’s largest democracy, at all listening to us?

The writer is a former chairman of the Andhra Pradesh Electronics Development Corporation, and the founder of the Prof. G.V. Sudhaker Rao Foundation