One of the slain militants was involved in the murder of Army jawan Aurangzeb in June last year. 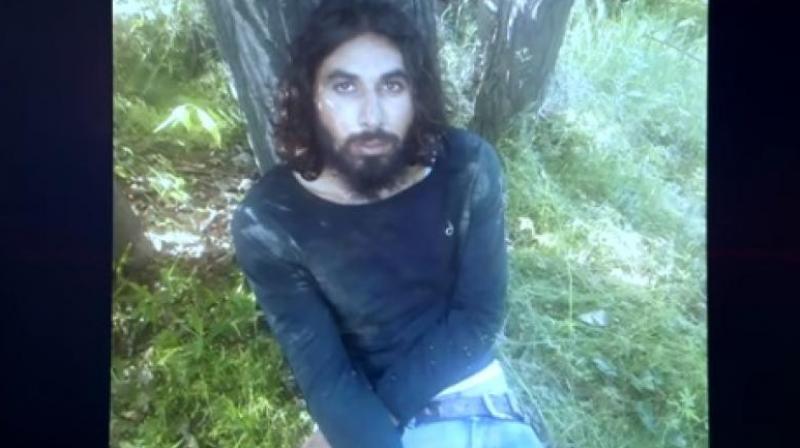 On June 14 last year, Aurangzeb was abducted by militants as he left his unit to celebrate Eid at his home in the frontier district of Poonch. (Photo: File)

Srinagar: In their continued tough campaign against separatist militants, the security forces on Saturday killed four more of them in two separate encounters in Jammu and Kashmir’s Pulwama and Baramulla districts. One of the slain militants was involved in the murder of Army jawan Aurangzeb in June last year, the police said.

Rifleman Aurangzeb of the J&K Light Infantry attached with Army’s counterinsurgency 44 Rashtriya Rifles was posted in south Kashmir’s Shopian district. On June 14 last year, he was abducted by militants as he left his unit to celebrate Eid at his home in the frontier district of Poonch. The same evening his bullet-riddled body was found ten kilometres away from the place of kidnapping, evoking a nation-wide outrage. He has posthumously conferred the Shaurya Chakra, a gallantry award given during “no war and no peace” scenarios, on the Independence Day this year.

The police said that Showkat Dar, one of the three militants killed in a firefight with security forces in Panzgam village of Pulwama district on Saturday, was part of the group which abducted and subsequently killed Aurangzeb. “He was part of a group involved in the killing of Army jawan Aurangzeb last year. He was also involved in the killing of a policeman Aqib Ahmed Wagay the same year besides planning and executing series of attacks on the security establishment in the area and “many other civilian atrocities”, a police spokesman here said.

The spokesman identified the two other slain militants as Irfan War and Muzaffar Sheikh and said that the trio was affiliated with Hizb-ul-Mujahideen outfit.

Giving the details of the encounter, defence spokesman Colonel Rajesh Kalia said that the Army’s 55 Rashtriya Rifles, J&K police’s counterinsurgency Special Operations Group (SOG) and the Central Reserve Police Force (CRPF) laid siege to Panzgam at dawn on Saturday after receiving inputs about the presence of militants in the village. “While the cordon-and-search operation was underway, the terrorists hiding in the area opened fire on security forces. The fire was returned, triggering the encounter,” he said.

Later during the day, fighting broke out also in Hathlangoo village outside the north-western town of Sopore when the Army’s 22 Rashtriya Rifles and SOG launched a cordon-and-search operation in the area on learning about the presence of militants inside a residential house. Simultaneously, the authorities suspended the mobile Internet services in Sopore town “as a precautionary measure”.

The police said that one militant was killed in the Hathlangoo firefight and that the slain man’s identity is being ascertained.

On Wednesday, five militants were killed by the security forces in two separate encounters in Pulwama and Shopian districts. The officials had said that one of the slain militants was top Jaish-e-Muhammad commander Khalid Bhai, a Pakistani national. Two Army jawans and two civilians were also killed during these operations.

A shutdown was observed in Kashmir Valley on Friday to mourn and protest the killing of militants and civilians. The call for the strike had been issued by ‘Joint Resistance Leadership (JRL)’, the alliance of key separatist leaders, saying “There’s no let up in killings in Kashmir, even during the holy month of Ramzan.”

A report from Anantnag said that traders brought their shutters down and public transport services were withdrawn from roads in the town and its neighbourhood on Saturday following rumours that a local Lashkar-e-Tayyaba militant Tariq Khan has been surrounded by the security forces during a search operation in Dehruna village of Kokernag area of the district. The police sources said that the operation at Dehruna was called off after the militants reportedly managed to escape from the village.

Meanwhile, curfew continued to be in force in Bhaderwah town of eastern Doda district on the third consecutive day in view of persisting tensions set off by the killing of a 50-year-old drover Nayeem Ahmed Shah. The police have constituted a Special Investigation Team (SIT) to probe the shooting incident in which two other persons were injured during the intervening night of May 15 and 16.

The incident, blamed on ‘cow-vigilantes’ by the local Muslim groups had sparked off violent protests in Bhaderwah following which the communally sensitive town was brought under indefinite curfew from Thursday morning. Senior Superintendent of Police (SSP) Shabir Ahmed Malik said the situation in the area is peaceful now. He said that newly constituted SIT along with a team of Forensic Science Laboratory (FSL) Jammu visited the crime scene on Saturday morning to collect the evidence.

The police have seized the 12 bore gun used in the crime. Seven persons have been detained for questioning. The police have, however, expressed doubt over the charge that those involved in the killing of Shah are ‘cow-vigilantes’.

The driver and two others were attacked at 2 am on Wednesday night when they were returning to their native Mohalla Qilla of Bhaderwah along with a herd of cattle. While the local Muslim groups have alleged that they were targeted deliberately “at the behest of BJP, RSS and Shiv Sena goons hell-bent to polarize the situation in Bhaderwah”, the accused have claimed that they opened fire after they found the men roaming under suspicious circumstances in the dead of the night.