The district administration supplies water to villages through tankers at a span of 15 days. 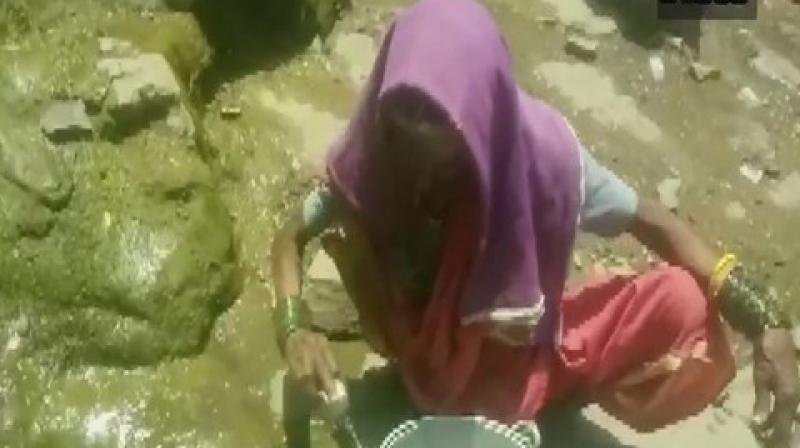 The water supplied to villages is not meant for drinking. (Photo: ANI)

Latur: With the onset of summer, the water crisis has returned to haunt the people of Latur. What further worsens the situation is the scanty rain the district receives every year. People's only source of water is a tanker which reaches them, but not so frequently.

Most of the villages in the district are faced with water crisis - the difference is only of degrees. Latur was also the first city to get 'water train' in 2016, but in vain. The crisis persists against all promises and efforts of the district administration.

The district administration supplies water to villages through tankers at a span of 15 days.

Dinkar Bhagwan Engle, deputy sarpanch of Ekurga village, while speaking to ANI, said: "The administration provides water in every 15 days which is not sufficient at all. Yet, they don't provide us with another tanker. Only 250 litres water is provided to one family every month."

The woes don't end here. The water supplied to villages is not meant for drinking.
"The water that is supplied is not for drinking. We have to buy drinking water separately. Now the situation has deteriorated so much that even buying potable water is getting so difficult," he said.

In view of the severe water crisis, agriculture has suffered a lot, thus affecting the people's income too.

"Due to water shortage, we can't grow crops and there are no other means of employment too," said another villager.

It is worth mentioning that in 2016 Indian Railways had arranged two goods trains (rakes) consisting of 50 tanker-like wagons each for the purpose of loading and transporting water in the drought-affected areas of Latur district.

Kota workshop of Indian Railways had been directed to undertake steam cleaning of wagons for the purpose of loading drinking water. The two goods trains had been deployed in Pandharpur-Latur section of Solapur division (275 km) for loading water.

On a demand from Rajasthan government and North Western Railway Zone (NWR), many goods trains had also been deployed to transport water from Nasirabad to Bhilwada in Ajmer division (109 km) from January onwards in 2016. (ANI)