With SC's verdict, B S Yeddyurappa has little over 24 hours to prove BJP's majority in Karnataka Assembly tomorrow. 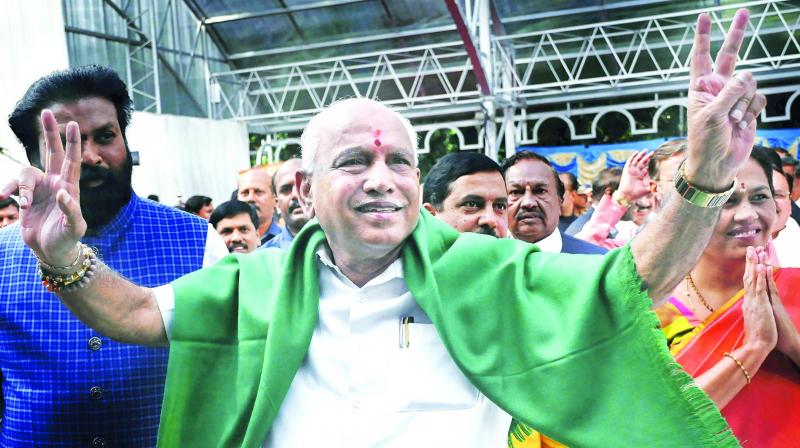 The Supreme Court on Friday directed BJP's B S Yeddyurappa to take the floor test in the Karnataka Assembly tomorrow at 4 pm. (Photo: PTI)

New Delhi: The Supreme Court on Friday ordered Karnataka Chief Minister B S Yeddyurappa to prove his party’s majority in the Assembly at 4 pm tomorrow, thereby brutally slashing a 15-day window that Governor Vajubhai Vala had allowed the BJP.

Yeddyurappa, who was sworn in as the Chief Minister on Thursday, heads a minority government with 104 MLAs, 8 short of a simple majority of 112 in the 224-seat Assembly.

After the Karnataka results returned a fractured verdict on May 15, the Congress-JD(S) teamed up in a post-poll alliance and staked claim on the government with 116 MLAs.

Incensed that Governor Vala chose to invite Yeddyurappa instead to form government -- as leader of the single-largest party -- the Opposition moved the Supreme Court on the night of May 15, challenging that decision.

In an unprecedented overnight hearing, the Supreme Court ruled it would closely scrutinise today the two letters that Yeddyurappa had submitted to the Governor on the basis of which he was invited.

The bench comprising Justices A K Sikri, S A Bobde and Ashok Bhushan heard the case on Friday morning.

During the hearing, the apex court noted: “It is just a numbers game, one who enjoys the majority should be invited to form the government.”

It observed since B S Yeddyurappa has claimed support and BJP is the single largest party, there could be two probabilities -- whether the Governor’s decision should be tested or a floor test be held on Saturday.

The Congress said it was ready but the BJP’s lawyer Mukul Rohatgi demurred asking for more time, which was ignored.

After the verdict, Yeddyurappa said: “I will discuss with Chief secretary and call for an Assembly session tomorrow. We are 100 per cent confident that we will prove majority.”

The Centre was represented by Attorney General K K Venugopal and Mukul Rohatgi.

Congress’ lawyer and party leader Abhishek Manu Singhvi informed that the Supreme Court has forbidden Yeddyurappa to take any policy decision until tomorrow."

“SC has delivered a historic interim order, many important directions have been given, one of them being that floor test has to be conducted at 4 pm tomorrow under a protem speaker," Abhishek Manu Singhvi said. He added: “We welcome the Supreme Court's order.”

Congress leader Ashwani Kumar said: “The Supreme Court's verdict has upheld constitutional morality and democracy. It's a judgement that should be celebrated. Faith of people in the wisdom of the SC is vindicated once again. It's a setback for a party that wanted to usurp power."

Union Minister Prakash Javadekar tweeted: “BJP is ready and confident of winning trust vote in Karnataka. We will prove our majority on the floor of the House."

During the hearing, both sides submitted to the court the letters they had given Governor Vala while staking claim to form government in Karnataka.

Amid fears of poaching and defection, the Congress-JD(S) alliance shepherded its MLAs last night to a hotel in Hyderabad.