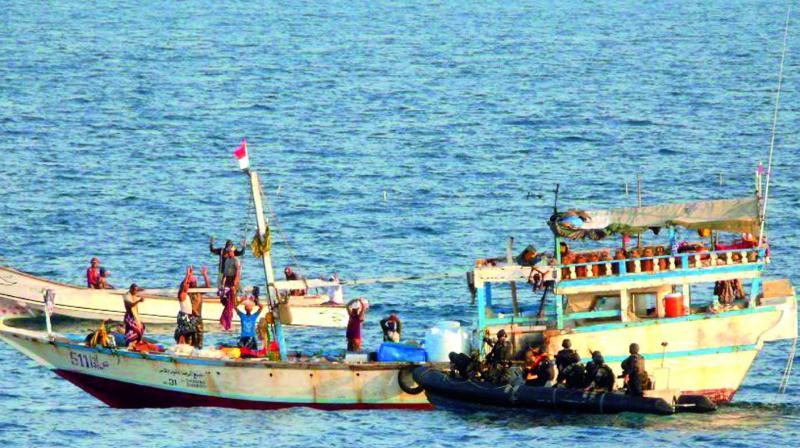 Indian Navy marine commandos thwart a piracy attempt on a Liberian vessel in the Gulf of Aden. (Photo: PTI)

New Delhi: In a meticulous operation involving marine commandos (Marcos), the Indian Navy on Tuesday thwarted a piracy attempt on a Liberian vessel in the Gulf of Aden.

At about 4.45pm, INS Sharda, deployed for anti-piracy patrol in the Gulf of Aden since April 6, received a distress call from MV Lord Mountbatten, about 230 nautical miles southwest of Salalah in the Gulf of Aden. The vessel had reported an incident of attempted piracy by two suspicious mother vessels along with 7-8 skiffs.

Sharda, which was at that time 30 NM east of the reported position, immediately responded to the distress call and rushed to investigate the incident.

A Navy spokesperson said: “On arriving in the area by about 7pm, Sharda detected two dhows along with eight skiffs in vicinity, three of which fled the area at high speeds on sighting the warship. Marcos, with support of the armed helicopter from the ship, investigated the dhows and their skiffs by conducting search operations”.

“The absence of any fishing gear onboard the two dhows and in the remaining five skiffs indicated malicious intent and possible piracy-linked intentions. One high calibre AKM rifle with one filled magazine (28 rounds) was found hidden onboard one of the dhows. The weapon and ammunition has been confiscated to prevent future illegal misuse.”

Indian Naval assets have been increasingly deployed in recent times to address the various maritime concerns of the region, including piracy off the coast of Somalia.

Last month too, the Navies of India and China had collaborated to rescue a merchant ship in the Gulf of Aden after it was hijacked by Somali pirates.

Indian Navy’s two frontline warships, INS Mumbai and INS Tarkash, were part of the operation while the Chinese Navy had deployed missile frigate Yulin. However, China had not acknowledged participation of Indian Navy in the operation.