Muslim community being singled out over virus, community elders say

Muslims are being continuously maligned by the local administration, it is alleged 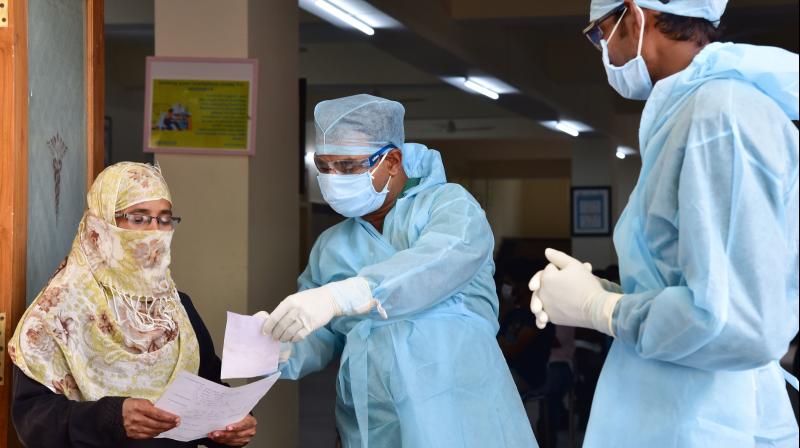 Doctors interact with a woman who tested negative for COVID-19 during the nationwide lockdown to curb the spread of cornavirus, in Hyderabad. PTI Photo

The minister's appeal on Thursday to 600 people who returned from the Tablighi Jamaat congregation or their contacts is being seen as an attempt to malign and typecast the people of the community as spreaders of the disease.

Mushtaq Malilk, president of the Tahreek Muslim Shabban, said, “It is a systematic attack on the community in the name of the disease.

The government has not brought to light more than 200 Jamaat people who tested negative. They were kept in the Nature Cure Hospital and discharged. It is this behaviour of the government and administration which is leading to problems as they are being discriminatory. In the time of a pandemic, we have a government repeatedly attacking a group of people and they expect them to show confidence in them.”

The manner in which the people from the community have been treated by police and the hospital administrations has been creating fear in them. Many of them are not willing to go to hospitals. Many of them complained of dirty, unhygienic conditions with no proper food being given to them.

Despite the World Health Organisation stating clearly that people, communities and localities must not be stigmatised, Muslims are being continuously maligned by the local administration right up to senior levels of government, said a community elder.

In the present case of tracking and tracing, health officials have complained of anger within the community which was not the case earlier.

A senior health official explained, “Before politicising the issue, there was complete co-operation from every citizen. But after the Nizamuddin Markaz incident not only Muslims but even others are scared. There is anger and health workers are facing the brunt of people. Politicians and bureaucrats do not think about ground level workers while making these kind of statements.”

Other senior members of community stated that they do not understand why only the case of Tablighi Jamaat returnees are being highlighted by the government. Prof. Abdul Majeed, a senior member of the community, said, “There were many congregations in March but not a single community has been targeted in the manner in which Muslims have been. Again, the government is working on the same lines. They must seek the help of people which they have not done. Is there any dialogue that they have initiated? Why? What is stopping them?”

Of the 750+ cases in the state only those with travel history abroad and the Markaz returnees have been documented while for the rest the list only says 'details awaited'. Health officials state that government does not want to record data of ‘other transmission’ as they are still in denial of ‘community transmission’. For this reason, health workers have been strictly told that it will be ‘other reasons’ or ‘unknown reasons’.

A senior health official said, “Instead of following the right method of not stigmatising people and society, the government has succeeded in making Covid-19 a stigma. It only shows the mishandling of this government.”