The deceased was identified as Sanjukta Digal. The injured were rushed to Kandhamal district headquarters hospital. 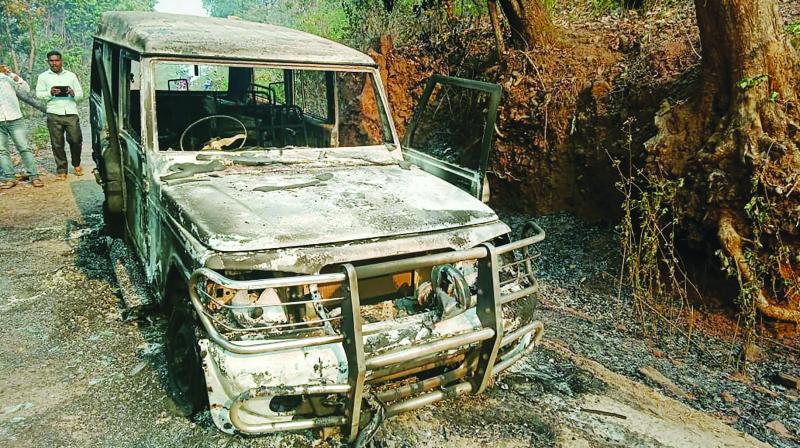 The charred remains of a vehicle that was allegedly torched by suspected Maoists. (Photo: PTI)

Bhubaneswar: A group of Maoists on Wednesday unleashed terror in Odisha’s Kandhamal district by killing a poll official and torching a vehicle carrying election officials.

Reports said the rebels blew up a polling van by triggering a landmine explosion at Barala village under Gocchapada village in Kandhamal district.  Soon after, the opened fired at the injured polling officials killing one of them on the spot and three others were injured.

The deceased was identified as Sanjukta Digal. The injured were rushed to Kandhamal district headquarters hospital.

In another act of violence in the same Kandhamal district, the extremists threatened the poll officials and forced them to alight from the vehicle. The incident took place this morning when the poll officials were heading towards a booth located at Mungunipadar under Phiringia police limits in the district.

The red rebels set the vehicle on fire after the officials vacated it. All poll officials were reportedly safe.

Notably, banners and posters by the Maoists had earlier surfaced in the district, in which the ultras had urged the people to boycott the polls.

The rebels, in the posters, opposed outsiders contesting from Kandhamal Lok Sabha seat. While the ruling BJD has fielded Dr Achyuta Samanta of Jagatising-hpur district, the BJP has fielded ex-MP Kharavela Swain for the seat.

Following the Maoist violence, security was heightened in Kandhamal and other parts of the state for smooth conduct of the general elections.

Five Lok Sabha constituencies Aska, Kandh-amal, Sundergarh, Barga-rh and Bolangir and 35 Assembly constituencies under them will go to elections in the second phase of 2019 polls on Thursday.

Police DIG (western range) Kabita Jalan said that as per guidelines of the Election Commission of India, polling booths have been categorised as sensitive and critical and the scale of security deployment has been done in those booths accordingly.