India   All India  18 Apr 2018  Is India really heading for a ‘cleanliness’ and ‘education’ drive?
India, All India

Is India really heading for a ‘cleanliness’ and ‘education’ drive?

Sadly, all citizens are still not aware of what does government’s autonomy drive spell for studying in universities. 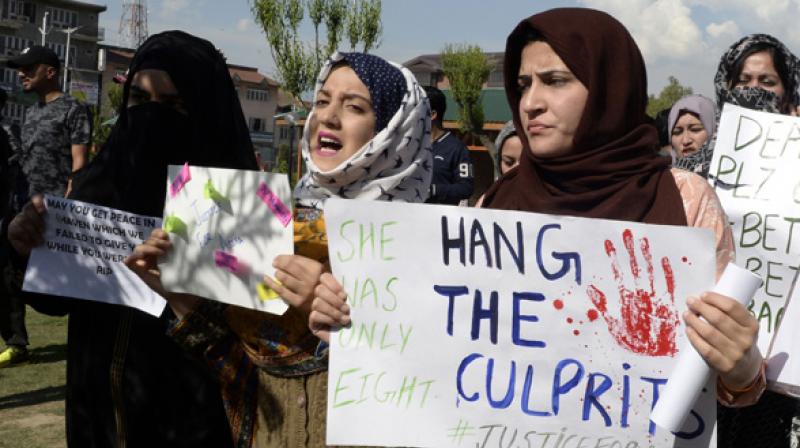 Demonstrators take part in a protest in Srinagar over the gangrape and murder of an eight-year-old girl in Kathua, Jammu and Kashmir. (Photo: AFP)

Oft and on, one is forced to pose the question as to how “educated” even some degree-holders and/or those in authority really are? They seem devoid of even basic cultural values. If they were not, brutal rapes and communal incidents would not have taken place. Certainly, Prime Minister Narendra Modi must be credited for giving so much importance to his cleanliness drive and talking about brighter future. Success of campaigns of this nature, however, will remain limited till major steps are taken to educate not just the masses.

Gruesome, inhumane incidents and several policies of the Central government may be viewed as mild indicators that future of the common people is at stake. What an irony, the majority of these living at the grassroots have learned, without going through any formal process of education. This includes occupations such as farming, carpentry, ironing clothes, hair cutting, tailoring and so much more, including begging. When Mr Modi talks of “achche din” (better days), it is not impossible to educate as well as train them a little more, improve their standard of living, help them rise above the poverty line, become healthier and so forth.

The first priority of poor in rural areas is to work hard enough to ensure food for their family members. As marked by agitation displayed by farmers, this stage has not yet been reached. Here comes the big question of where does cleanliness drive fit in priorities of these people? Certainly, those who can afford to and/or have been aided by the government have ensured construction of toilets in their residential areas. However, this does not imply that residents in rural areas were totally devoid of toilets before Mr Modi’s government stepped into power. As suggested, only the poorer sections, without proper houses, have not had toilets. This problem still prevails in not just rural areas but is also visible in urban slums.

This point is being deliberately made to highlight the hard-hitting fact that majority of Indians are still not economically strong enough to implement the cleanliness drive as being advertised and propagated. Yes, there also prevail certain habits, such as spitting in public, throwing litter out of car windows, dirtying public places in different ways and so forth. True, a lot of emphasis is being given in advertisements against these habits. But should this be considered sufficient? After all, not all people take these advertisements seriously. If they did, the country would have projected a totally different image about its cleanliness than it does at present. The same can be said about limited respect and importance still given to the fairer gender despite advertisements focusing on importance and equality of women. When considering the heinous manner in which some high-profile gentlemen have treated female children, one is forced to deliberate on how “clean” and “educated” their consciousness really is.

Considering the pace at which inflation and taxes have increased, one would assume that the government is not short of funds to indulge in expenditure, in the democratic interest for the country’s development and with it, of its citizens, at all levels. The cleanliness drive falls in this category. Besides, the Constitution does refer to citizens’ right to education. It is amazing, minimal measures are being taken by the Central government to ensure each citizen his/her right to education. Rather, adequate propaganda is being accorded to cleanliness drive, irrespective of steps being taken in this direction. In contrast, though the Central government has taken some drastic steps regarding education, it has chosen to remain largely silent. Why? The answer is not far to seek. Just a few years ago, college education was within reach of even low-salaried people. Now, slowly but definitely, it is slipping out of reach of even middle and upper-middle class sections.

Sadly, all citizens are still not aware of what does government’s autonomy drive spell for studying in universities. If the process of steep hike in fees continues as feared, India is least likely to have many graduates and post-graduates. Let us accept it, each family, lower, middle or upper class remains hopeful of their descendents moving further in life than they have. But if their budget, even after taking loans and all, does not permit higher education, how would they? Herein lies the catch. With due respect to goals set for the cleanliness drive, they are likely to remain limited, even be defeated as flaws in education drive are exposed before the people. This raises the question where is India headed for?

Perhaps, it is imperative for respected leaders to go beyond keeping the country litter-free in their cleanliness drive and talking of better days while focusing on autonomy of colleges and universities. The increasing number of communal incidents and rape cases are just mild pointers to the dirt in which even the well-dressed, carrying a “clean plus educated image”, can and do sink into. What is worse is that certain elements have not refrained from justifying these stains. Maybe it is high time that terms such as literacy rate and cleanliness drive are redefined, with emphasis on instilling higher cultural values among those who care little for the poor and women!